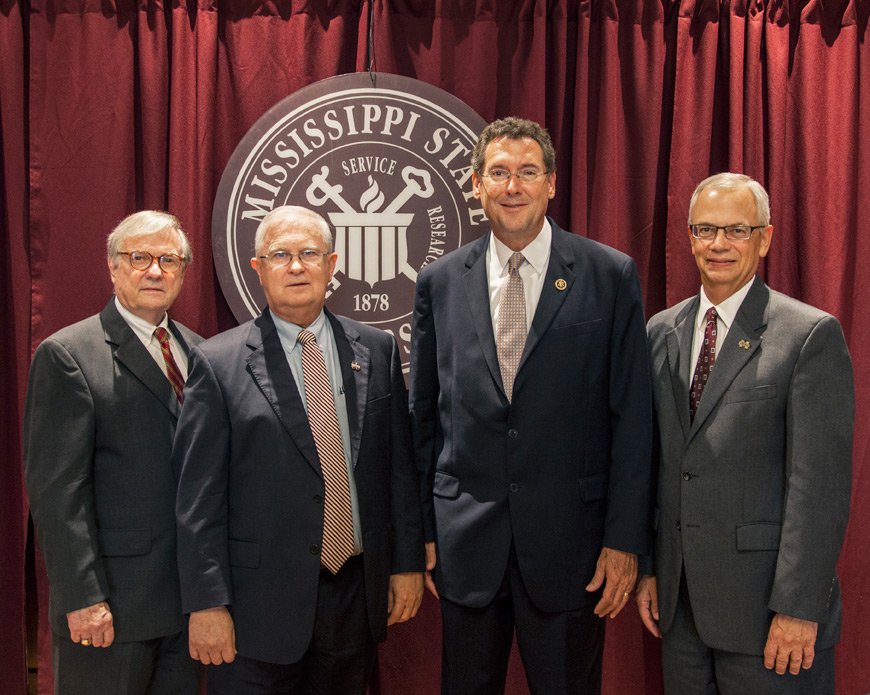 On the Aug. 5 occasion—what would have been the former U.S. representative’s 95th birthday—the university formally dedicated the collection in its Congressional and Political Research Center at Mitchell Memorial Library.

University officials said the collection includes more than 1,200 cubic feet of correspondence, memos, speeches, floor statements, photographs and memorabilia about the longtime public servant and MSU alumnus who died in 2006 at age 85.

The files cover the Meridian native from his time at the McCallie School in Chattanooga, Tennessee, through his student leadership at then-Mississippi State College to his World War II military service in Europe, where was awarded a Bronze Star with Valor. The collection also highlights his public service career that began with a decade in the Mississippi Legislature, followed by 30 years in Congress that concluded with retirement in 1997.

Jerry Gilbert, MSU provost and executive vice president, said “from his years as a Mississippi State student throughout his lifetime, Sonny Montgomery was considered a leader who worked tirelessly on behalf of those he served.”

Noting how the congressman’s “leadership and people skills served him well throughout his career,” Gilbert also praised Montgomery for being “a devoted and loyal friend of Mississippi State and one who frequented the campus throughout his life and whose legacy can been seen throughout the campus.”

During his time in Washington, D.C., Montgomery gained an international reputation for his tireless work on behalf of American military veterans. In addition to visiting Vietnam repeatedly throughout the war and assisting in the return of prisoners of war, he most notably led in securing an extension of the G. I. Bill—an effort that his colleagues renamed the “Montgomery G. I. Bill” in tribute.

Additionally, the collection illustrates the close friendship between Montgomery and former President George H.W. Bush. The two met on their first day in Congress in 1967 and remained friends for the remainder of the congressman’s life.

In his remarks, Harper praised Montgomery for serving the district and nation “with integrity, compassion and hard work.

“His efforts on behalf of our country’s veterans and the people of Mississippi are still realized today, and we are eternally grateful,” Harper said.

“Sonny loved Mississippi State University, and I know that he would be proud of the new G.V. ‘Sonny’ Montgomery Collection,” he continued. “I hope that this collection will be a reminder of Sonny’s esteemed public service for generations to come.”

For more on the Mississippi State University Libraries, see www.library.msstate.edu.

Image Alternative Text: A student presses the "walk" button at the intersection of Bulldog Way and East Lee Boulevard