Keenum installed as honorary consul to Kingdom of Morocco 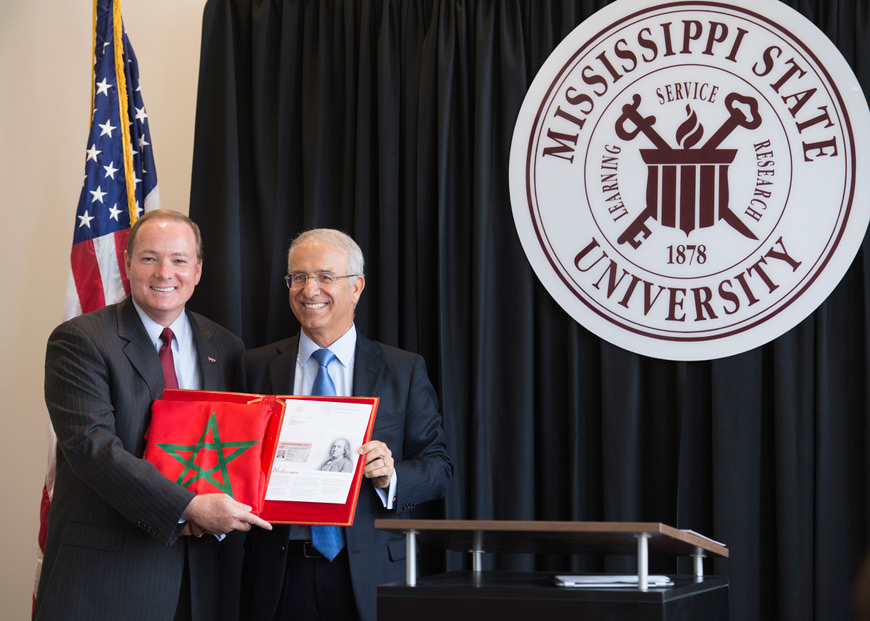 STARKVILLE, Miss. — Mississippi State University President Mark E. Keenum has been named Honorary Consul to the Kingdom of Morocco in Mississippi by Moroccan Ambassador Rachad Bouhlal, the country’s ambassador to the U.S., in ceremonies held today [Sept. 11] at The Mill at MSU.

Keenum’s appointment was approved by the U.S. State Department. Morocco is one of North Africa’s most stable and successful nations.

“I count this a great personal and professional honor, one that will enable me to work with our friends in Morocco and in Mississippi to expand economic and cultural opportunities for people of good will in both Morocco and in our own state and nation,” said Keenum. “This designation also helps Mississippi State as we continue to seek to further expand the university’s global footprint through meaningful research and productive partnerships.”

In his seventh year as MSU’s president, Keenum will work to help further develop cultural and business relationships between Mississippi and Morocco.

In his remarks, Bouhlal praised Keenum and outlined the important role played by honorary consuls in the promotion of the image of Morocco abroad and the diversification of the economic, commercial and cultural ties between the U.S. and Morocco – saying those relationships “paved the way for closer cooperation and deeper understanding, reinforcing, thus our common and shared values of democracy, tolerance and shared prosperity.”

Keenum’s interest in Morocco grew out of friendships with key Moroccan diplomatic officials, including Ambassador Bouhlal. The ambassador gave a speech at MSU earlier this year about the Arab Spring and Morocco’s strategy in fighting radicalism. The ambassador also spent a day in Jackson where he addressed MSU’s Executive Lecture Forum and met Governor Phil Bryant and state economic development officials.

MSU also signed a memorandum of understanding agreement with the International University of Rabat (IUR) for the implementation of a School of Automotive Engineering at the UIR campus in Rabat, Morocco.