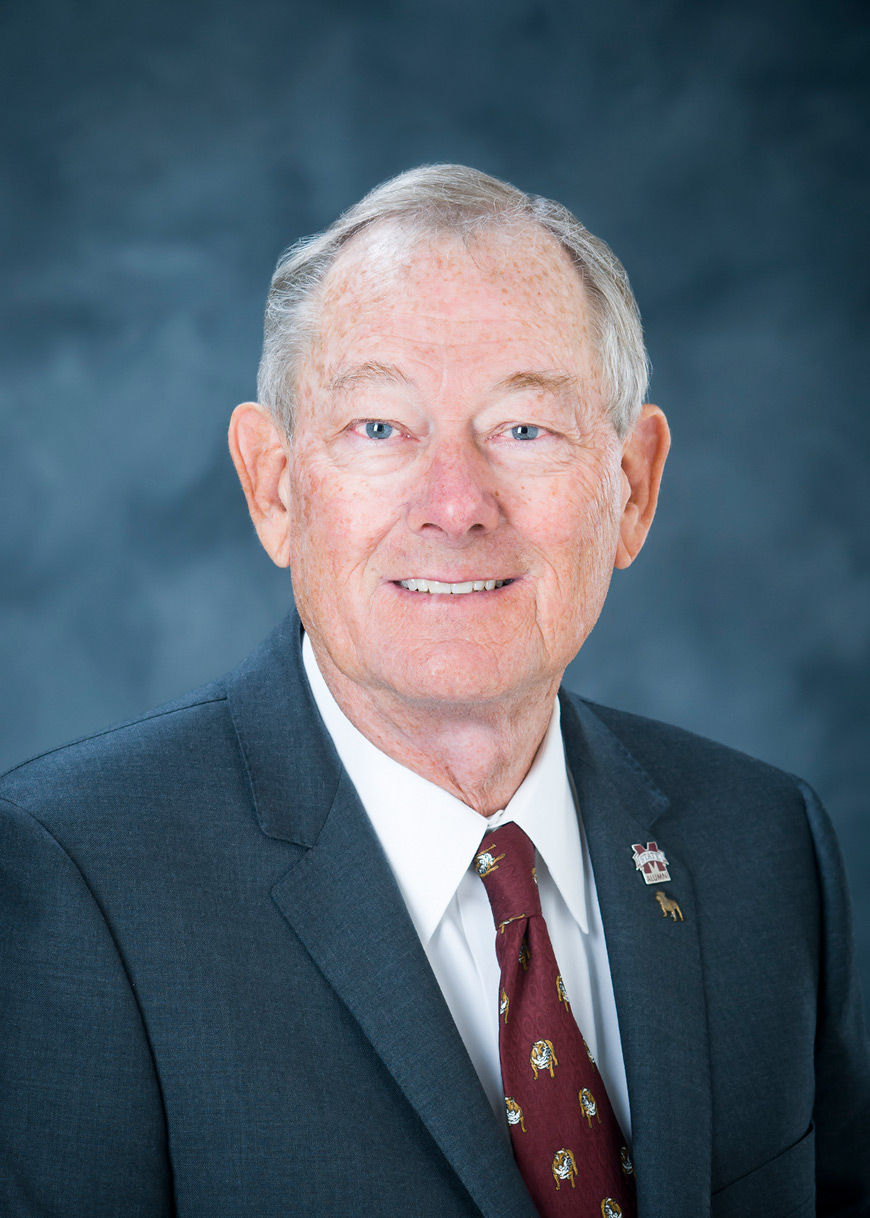 STARKVILLE, Miss.—Mississippi State will recognize 1967 general business graduate and retired retailer Turner A. Wingo of Collierville, Tennessee, as its national alumnus of the year during the Friday [Feb. 12] MSU Alumni Association 2016 awards banquet.

“We are proud to salute Turner Wingo on behalf of Mississippi State University for his professional success and for his loyal lifelong connection with his alma mater,” said Jeff Davis, executive director of the MSU Alumni Association. “Of our more than 133,000 living alumni, Turner is a distinguished selection for Alumnus of the Year.”

Wingo is a native of Socorro, New Mexico, who grew up and graduated from high school in Collierville in 1963. Following graduation from MSU, he returned to Collierville where he worked in real estate and opened Sherry’s Hallmark. He also spent six years in the U.S. Army National Guard.

At Mississippi State, Wingo currently serves on the board for the MSU Foundation, chairing its real estate committee since 2015. Over his lifetime, Wingo has generously supported Mississippi State with scholarships in the colleges of Architecture, Art and Design, Business, and Engineering. His giving also extends to athletics, the Turner A. Wingo Endowed Professorship in the College of Business, and campus facilities.

For his many accomplishments, Wingo previously has been recognized by Mississippi State. He was named the 2011 College of Business Alumnus of the Year and, most recently, was honored among the business college’s top all-time 100 graduates for its centennial anniversary.

Wingo is a member of the Patriots Circle for the National World War II Museum in New Orleans, Louisiana, and he is a board member for Alpha Corporation, Inc. He has also been a member and vice president of the Memphis Maroon Club for Bulldog alumni and friends.

Along with the national alumnus recognition, each of MSU’s eight academic colleges will honor a graduate for outstanding personal, professional and community achievements.

COLLIERVILLE, Tennessee—George D. “Dave” Thomas Jr., College of Agriculture and Life Sciences. A 1987 master’s in agricultural economics graduate, Thomas is vice president of marketing for Helena Chemical Co., a role he has held since 2009. He joined Helena in 1987 and over the years has served as location manager for Louisiana and Mississippi and also as manager for the South Delta Division and South Texas Division. He also holds a bachelor’s degree in mathematics from the University of Mississippi.

HOLLY SPRINGS—Robert P. “Bob” Bowen, College of Arts and Sciences. A retired CPA, Bowen is a 1963 history and political science graduate who spent 30 years with Arthur Andersen LLP, concluding his career as partner. Bowen became a director and audit committee chair for three New York stock exchange-listed public companies, and has served on a number of civic boards in Memphis and North Mississippi. He also received an MBA from Emory University in 1968.

JACKSON—Haley R. Fisackerly, College of Business. A 1987 business administration graduate, Fisackerly is president and CEO of Entergy Mississippi Inc., a role he has held since 2008. His career with Entergy has included roles as director of system regulatory strategy and vice president of customer operations, among others. He also had a stint at Entergy Nuclear as vice president of governmental and regulatory affairs. Prior to joining Entergy in 1995, Fisackerly managed the Washington, D.C., office of U.S. Sen. Thad Cochran. He also earned a master’s degree in public policy administration from George Washington University in 1993.

Also of JACKSON is Andrew W. Grady, College of Veterinary Medicine. A 1986 doctor of veterinary medicine graduate, he directs the Center for Comparative Research and is an associate professor in the Department of Microbiology at the University of Mississippi Medical Center. Since 2001, Grady has served as veterinary medical officer for the Jackson-based Veterans Affairs Medical Center. He serves as an adjunct professor in MSU-CVM’s Department of Clinical Sciences. He also holds a Master of Laboratory Animal Medicine from the University of Missouri.

KENNESAW, Georgia—Eric G. Yonge, College of Architecture, Art and Design. President and creative director of EYStudios, Yonge is a 1998 fine arts graduate. Yonge began EYStudios in Starkville, where he was raised, and later relocated the company to Georgia. Under his leadership, EYStudios has developed more of the world’s Top 1,000 e-commerce stores than any other private firm in the world.

LITTLE ROCK, Arkansas—John D. Enlow, College of Forest Resources. A 1990 forestry graduate, Enlow is vice president of real estate and southern timberlands at Weyerhaeuser Co. He joined Weyerhaeuser in 2014 to lead the company’s southern division and in 2015 assumed leadership of Weyerhaeuser’s real estate nationally. He also holds an MBA from Brenau University and is a graduate of the Executive Education Strategy Program of The Wharton School at the University of Pennsylvania.

PELAHATCHIE—Andrea Scott Mayfield, College of Education. Mayfield is an MSU 2009 doctoral graduate in community college leadership who became executive director of the Mississippi Community College Board in 2015, overseeing the state’s 15 community and junior colleges. Prior to this, Mayfield served as president of Shelton State Community College in Alabama. She earlier spent 18 years at East Mississippi Community College, where her roles included vice president of the Scooba campus. Mayfield also holds a Bachelor of Science in biology and a Master of Arts in teaching, both from the University of West Alabama.

Other graduates to be given special recognition at the banquet for service to the alumni association will include (by hometown):

BROOKHAVEN—Jason A. Snider, a 2010 business administration graduate, receiving the Outstanding Young Alumnus Award. Snider works as risk management coordinator for King’s Daughters Medical Center, and he recently became a certified professional in Healthcare Risk Management.  He was chapter president for the Lincoln County alumni chapter in 2013 and 2014. Since 2013, Snider has served as a National Alumni Board member for the Mississippi South 2 Region. He also earned a master’s of Health Services Administration from Mississippi College in 2012.

HUNTSVILLE, Alabama—Brian M. Sabourin, a 1983 aerospace engineering graduate, receiving a Distinguished Service Award. Sabourin is director for corporate development for Strata-G Solutions Inc. He previously has served as the deputy project manager for Fixed Wing Aircraft and the deputy project manager for Aviation Systems, both with the U.S. Army Aviation. Sabourin is vice president of the Huntsville-Decatur alumni chapter, having served in roles ranging from president to membership committee lead. He was a national board member in 2014.

LUCEDALE—Douglas D. “Doug” McLeod, a friend of the university receiving the Distinguished Service Award. He has owned McLeod Tire Company for nearly 30 years. McLeod also is a member of the Mississippi House of Representatives, representing District 107 in his second term. With the George-Greene County MSU alumni chapter, Doug served as secretary from 2001 to 2009, vice president from 2010 to 2012, and president from 2013 to 2015.

TUCKER, Georgia—Kieu-Anh T. Tran, a 1996 civil engineering graduate, receiving a Distinguished Service Award. Tran is vice president, engineer and project manager at Q Solutions Inc., and a registered professional engineer in Mississippi, Alabama, Georgia and Tennessee. In 2004, Tran was the university’s Outstanding Young Alumnus. She is a member of the Atlanta, Georgia, alumni chapter and has been an officer in the Central Mississippi and Nashville, Tennessee, chapters. From 2010-2013, Tran served on the Alumni Association National Board.

Other highlights of the awards banquet will include the announcement of individual chapters recognized for their achievements during the 2015 calendar year. Some 54 chapters of the university’s 95 worldwide are scheduled to be saluted.

The 2016 alumni awards banquet will be simulcast live via the Internet, beginning at 6 p.m. on Feb. 12 from The Mill at MSU Conference Center. For a broadcast link and more on the MSU Alumni Association, visit www.alumni.msstate.edu.