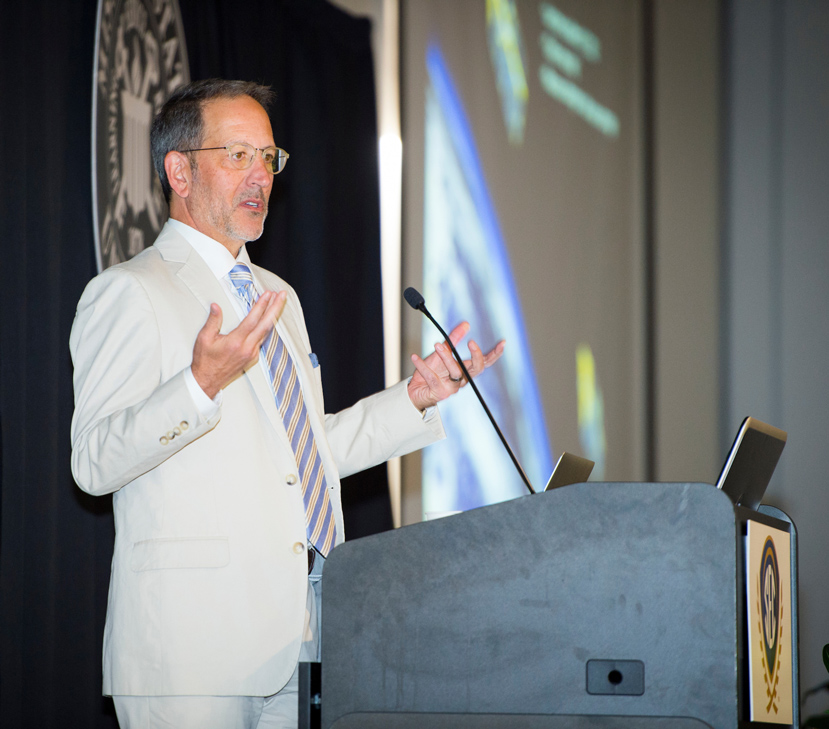 “Of the world’s 37 major aquifers, about 20 are past sustainability tipping points and correspond to our major food-producing regions,” said Famiglietti, a senior water scientist at the NASA Jet Propulsion Laboratory at the California Institute of Technology.

Famiglietti was the founding director of the UC Center for Hydrologic Modeling, a University of California system-wide center formed to develop state-of-the-art predictive models to address high-priority water issues in California and the Western United States.

“We have chronic water scarcity in California and the West,” he said. “The drought comes and goes, but our need to grow food for all of us is always there and we make up the difference by using groundwater.”

A former professor of earth system science and civil and environmental engineering at the University of California-Irvine, Famiglietti described groundwater as the water stored under the ground in aquifers. Along with being the primary water source for more than 2 billion people, groundwater provides almost half of the water for irrigation and often times is nonrenewable, he said.

“Groundwater induced land subsidence is like the deflation of a tire and mainly occurs where clay minerals exist, which is about a quarter of the central valley in California. We are currently experiencing the fastest rates of groundwater depletion and subsidence ever,” Famiglietti said.

According to Famiglietti’s calculations, groundwater depletion has amounted to 300 trillion gallons from mid-latitude aquifers over the last 15 years.

Famiglietti said India and the Middle East are two mid-latitude regions that have experienced the greatest rates of groundwater depletion over the last decade and a half.

“Climate models suggest that the wet areas of the world are getting wetter and the drier areas are getting drier,” he said.

Since 2002, Famiglietti said NASA has sought to address water security challenges through its GRACE Mission, which recently celebrated its 15th anniversary. Separated by 200 kilometers, the mission’s two satellites, or “scales in the sky,” orbit at 400 kilometers to measure changes in total water shortage.

“The data we’ve been collecting on the ice sheets, sea level rise, what’s happening with the aquifers, and water storage is so revolutionary in terms of our understanding of large scale global water cycle and movements that we have to continue,” Famiglietti said. He added that such work will be facilitated by a climate continuity mission called GRACE Follow-On, expected to launch later this year or early 2018.

Famiglietti discussed the implications and communication challenges faced by those in academics and research. Simultaneous management of surface water and groundwater will be crucial moving forward, he said.

“We need to recognize groundwater as a critical element of national, international and regional water supplies,” Famiglietti said. “As a community, we need to work together to elevate critical water issues to the level of everyday understanding. Once people truly understand the sources of their water, they would really appreciate the need for better monitoring, management and stewardship.”

At the NASA Jet Propulsion Laboratory, Famiglietti heads the JPL Water Initiative, a strategic effort to bring the resources of NASA to bear on regional-to-global water and sustainability issues. He is a regular adviser to the U.S. Congress and the California Governor’s office on water availability and water security issues. For more, visit http://jayfamiglietti.com.

The SEC Academic Conference represents an expanded slate of academic programming currently supported by the Southeastern Conference. The on-campus event showcases SEC university research in areas of critical importance within the region and around the nation. SECU is the academic initiative of the SEC, and it serves as the primary mechanism through which the collaborative academic endeavors and achievements of SEC universities are supported and advanced.

For more on SECU, visit www.TheSECU.com.