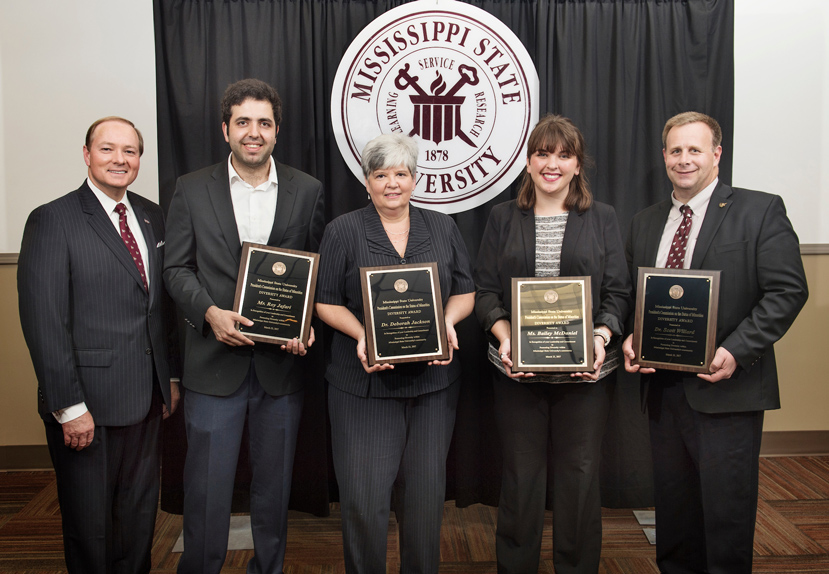 The students and faculty members received their respective 2017 Diversity Awards during a ceremony hosted by the MSU President’s Commission on the Status of Minorities. The commission is led by committee chair Lakiesha Williams, an associate professor in the Department of Agricultural and Biological Engineering.

“This ceremony is intended to recognize individuals who demonstrate a significant commitment to enhancing diversity at Mississippi State University,” Williams said. “This year’s winners stepped outside of the norm and exhibited a great passion for exploring and promoting diversity.”

The 2017 Diversity Award honorees are:

—Scott Willard, associate dean of the College of Agriculture and Life Sciences. Willard is author/co-author on 98 peer-reviewed scientific publications and has published numerous abstracts, extension and popular press publications in his field. He is a recent fellow of the Southeastern Conference Academic Leadership Development Program. Willard has been involved in efforts to engage underrepresented minorities and women in STEM, was a program manager in the development of a USDA Higher Education Multicultural Scholars grant, and more recently has worked to establish a World Food Prize-affiliated Mississippi Youth Institute to create opportunities for youth across the state to consider careers in agriculture and join the fight against global hunger and poverty.

—Deborah Jackson, assistant professor in the Department of Counseling, Educational Psychology and Foundations. Jackson holds three degrees from MSU and conducts research in the areas of stress management counseling, alcohol and drug education and assessment, motivational interviewing and multicultural and diversity issues in counseling. Jackson chaired the MSU Safe Zone Advisory Board from its inception in 2010 until February 2016. The Safe Zone Advisory Board was instrumental in developing and implementing awareness and advocacy training programs on campus, as well as establishing resources for the MSU, Starkville and Golden Triangle LGBT and ally communities. In addition to her work with Safe Zone, Jackson has facilitated campus focus groups and MSU Student Counseling Services LGBT counseling groups. In the past two years, she has expanded her advocacy and training efforts to community and regional levels.

—Roy Jafari, a doctoral student in industrial and systems engineering. A native of Tehran, Iran, Jafari has served as a research assistant, graduate teaching assistant and an instructor over the last three years in the Bagley College of Engineering. Jafari has been active in multiple student organizations, serving as president of the International Student Advisory Board. He also writes for The Reflector, the campus student newspaper, as a staff writer in the opinion section.

—Bailey McDaniel, a senior undergraduate student in sociology. McDaniel, a Corinth native, is a member of the Judy and Bobby Shackouls Honors College and was named a Truman Scholar finalist last month. She is studying criminology and pursing a minor in gender studies. McDaniel works as a volunteer for the Center for Violence Prevention in Pearl. She was one of two women chosen for the MSU President’s Commission on the Status of Women Outstanding Student Female Leader Award in 2016. McDaniel’s passions include advocating for LGBTQ+ rights and educating the public on the need for sexual assault policy reform and victims services. She has served as the President of LGBTQ+ Union for two years and sits on the Safe Zone Advisory Board as the only undergraduate board member.

During Thursday’s ceremony, MSU President Mark E. Keenum thanked the honorees for what they have done to help make MSU a better place.

“We are now the most diverse university in the Southeastern Conference and the most diverse land-grant university in the nation,” Keenum said. “We have made great strides and I am very proud of what we are doing to this day. But with all the great strides we’ve made, we still have a lot of work to do, and we’re committed to doing that work. It takes people to do all the great things we’re doing, and the people we’re recognizing this afternoon are the reason why we’re having great success and why we are committed to having great success going forward.”

For more on the MSU President’s Commission on the Status of Minorities, visit www.committees.msstate.edu/pcsm.