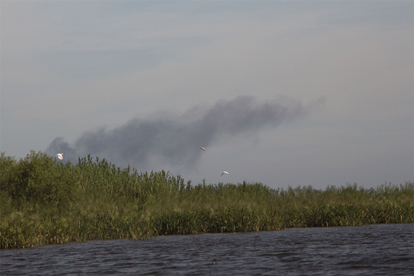 STARKVILLE, Miss.—A Mississippi State research team is completing a high-technology project that should help prevent the spread of an invasive grass species along Gulf of Mexico coastlines.

The university group initially was only collecting hydrologic data as part of a project funded by the National Oceanic and Atmospheric Administration. Titled SHOUT4Rivers, the project was to map Lower Pearl River delta regions using unmanned aircraft systems, so forecasters would know where water would move during periods of flooding. The official grant name is Sensing Hazards with Operational Unmanned Aircraft Systems Technology for Rivers.

As team members were reviewing collected images of the area near Louisiana’s St. Tammany Parish, invasive species expert Gray Turnage spotted pockets of something that should not be there—Phragmites australis, botanical designation for a perennial found throughout many temperate and tropical regions.

A Biloxi native and MSU master’s degree graduate in biological sciences, Turnage is a research associate at the campus’ Geosystems Research Institute.

Knowing phragmites can pose real dangers to both humans and native wildlife, the MSU team decided to slightly expand the project’s research focus and attempt to quantify the extent of infestation.

According to Turnage, human issues come primarily from the height of a full-grown plant. At typically around 16 ft., it can make navigation very difficult by diminishing overall visibility and preventing the easy recognition of critical landmarks and markers. Additionally, it may cause disorientation by distorting the normal flow of sound from, say, an approaching motorboat.

In the non-human realm, Turnage said “this particular strain of phragmites grows very densely and very rapidly, outcompeting native salt-marsh vegetation” for nutrients and other essentials necessary for proper growth and development.

As if dense groupings and rapid expansions weren’t enough, the invasive species can “provide little or no food or shelter for most salt marsh-dependent wildlife,” he explained. When this occurs over a large enough area, the continuing existence of some native species may be threatened or even endangered, he emphasized.

Sathish Samiappan, a Mississippi State GRI postdoctoral associate, was responsible for developing the computer software used for image analysis. A native of India, he holds a doctorate in electrical and computer engineering from MSU.

As Samiappan explained, UAS technologies are superior to satellites and manned flights in several ways. While satellite imaging may cover a very large area at once, those images are much less precise. Manned-flight images may be taken closer to the ground while covering a large area, but significant costs are incurred when hiring a pilot and airplane for an overall process that can be very time-consuming.

With a UAS vehicle, “the image area may be much smaller but the images are more precise and the process costs less and requires much less time to complete,” he said.

“We differentiate the objects in an image by their color, texture, shape and more; these are called features of an image,” Samiappan said. “Computer software cannot, however, make these distinctions, so we have to write software that trains them to recognize an image in much the same way we do.”

Accurately identifying the areas where Phragmites grow can help local resource managers from, but not limited to, the St. Tammany Parish, local United States Forestry and Wildlife Services offices (USFWS), and the State of Louisiana reclaim affected areas.

As the project nears completion, both MSU researchers agreed that their next goal is to seek out additional opportunities to apply their newly developed image-enhancing process.

Many years ago, MSU created an institutional-level GeoResources Institute to combine and integrate academic and operational units active in conducting and coordinating research and educational activities. From the beginning, it employed geospatial technologies and resource management, particularly in areas related to agriculture, forestry, water resources, computational modeling and visualization.

In 2008, the unit was renamed to the Geosystems Research Institute to encompass what had become a wider range of research programs. For more on the GRI, visit www.gri.msstate.edu/about.