The sky’s the limit: MSU student venture may have global impact on rural internet access 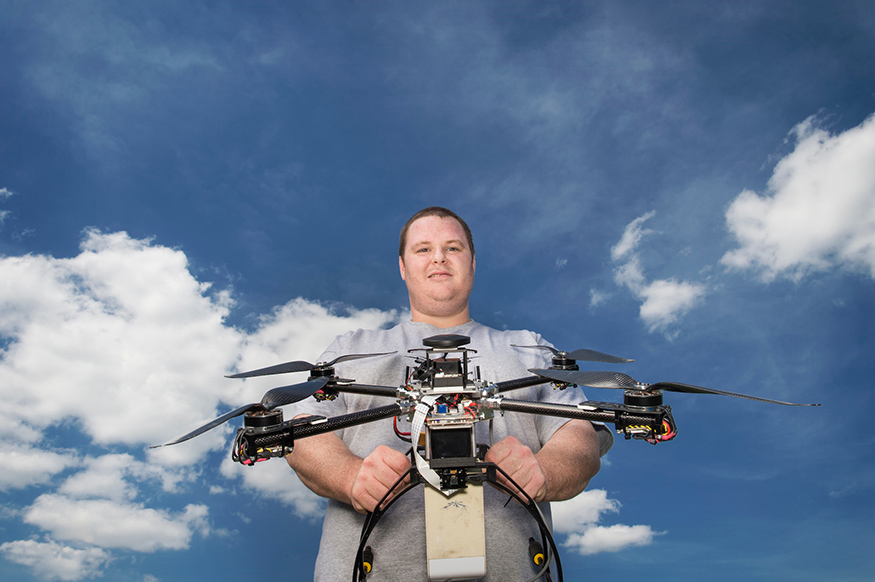 STARKVILLE, Miss.—A recent Mississippi State engineering graduate is leading a team of other young alumni and current MSU students who are transforming the wireless internet service industry. Their work could mean big improvements for internet access in rural areas of the U.S. and has the potential to make a global impact.

About half of the world’s population does not have internet, and running fiber is not economically feasible in most rural areas. However, WISPr Systems, a new company birthed at MSU, could help make internet access in rural areas much more practical and affordable. 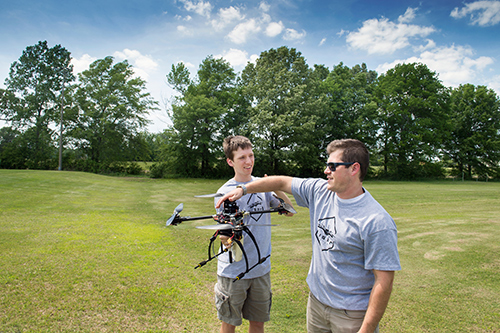 With novel technology, Conor Ferguson and his associates have utilized MSU’s Center for Entrepreneurship and Outreach in the College of Business, which offers resources and a network of business experts who have coached the burgeoning company through the start-up process.

WISPr Systems builds advanced automation tools for wireless internet service providers that eliminate the cost-intensive process of optimizing antenna placement. Until now, when establishing internet service for a new customer, multiple technicians have had to climb into bucket trucks for an awkward balancing act of juggling a laptop and large antenna arrays for determining the best placement to gain optimal signals.

“This automated process will make it vastly more affordable to connect people anywhere to the internet,” said Ferguson, the company’s 27-year-old president and CEO and a December 2017 electrical engineering graduate of MSU’s James Worth Bagley College of Engineering. He said the process not only saves significant time, but also cuts costs by about 20 percent.

MSU entrepreneurship advisers are saying WISPr Systems is among the most successful student-led start-up businesses to date.

Eric Hill, director of MSU’s Center for Entrepreneurship and Outreach, said WISPr Systems is a very impressive start-up company for a number of reasons. It’s also the first to complete the center’s new VentureCatalyst program, a guided five-stage program that helps student, faculty or staff entrepreneurs take a business concept from an idea to a funded company.

“The total dollar potential for this project is higher than any we’ve seen in my time here,” said Hill, an MSU industrial engineering alumnus who has led the Entrepreneurship Center since 2013.

“What I love about this deal is that it’s high tech, involving unmanned aircraft systems, which is one of MSU’s research focus areas. It was launched through our VentureCatalyst program, is being funded by MSU graduates, and it’s creating actual jobs in Mississippi. This illustrates from start to finish what success means to the Entrepreneurship Center,” Hill said.

The company currently employs three programmers and three in manufacturing, in addition to Ferguson, who hopes to add financial and marketing employees as the company grows. 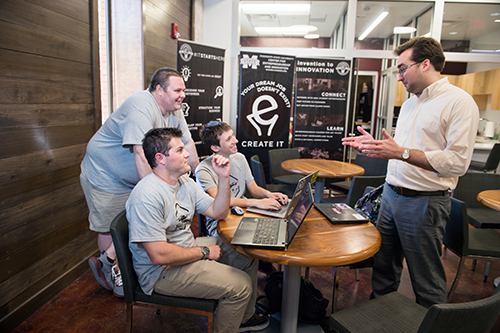 While Ferguson and Ratcliffe are both from Batesville, the two connected during mutual studies at Northwest Mississippi Community College in their engineering physics course.

Ferguson said when the two enrolled at MSU, Ratcliffe initially was in another engineering major. “I showed him all the fun stuff I was doing in electrical, and he switched majors,” Ferguson recalled.

Ferguson was a nontraditional college student, slightly older because he worked four years full time between high school and college. He began working with computers as a child, and he learned about business from his father who owns a computer and data business in Batesville.

As Ferguson spent time doing the technical work of installing antennae for wireless internet, he was inspired to improve the cumbersome process.

When he came to MSU in 2014, he enjoyed college life during a winning football season, but he said soon the demands of the electrical engineering curriculum “got real.” His free time was limited as he balanced coursework and student research jobs within the department, often studying well into the night hours.

Now, he’s quick to praise faculty members like Bryan Jones and Mehmet Kurum who let him investigate his interests with unmanned aircraft vehicles. He said if he had the time, he’d love to earn an MSU graduate degree in electrical engineering “just because it would be so much fun.”

“They gave me a chance when a lot of people wouldn’t have, and that’s all I needed,” Ferguson said.

While the Bagley College of Engineering was teaching Ferguson needed skills and helping him pursue passions related to the company he had in mind, looking back, he said, “I was a little naïve and cocky, thinking I could just do it all on my own and not need anybody’s support.”

He changed direction on the first day of an entrepreneurship seminar class. When Hill, who co-instructs the seminar, explained the complexity of building a small business, let alone a larger company, Ferguson decided it was time to dig in to the resources at MSU’s Center for Entrepreneurship and Outreach.

Not only did Hill and a team of entrepreneurship advisers and mentors help Ferguson work through the VentureCatalyst program, but they offered constant guidance as he developed and revised his business plan.

At the Entrepreneurship Center, a team of advisory board members is close by, consisting largely of faculty versed in marketing, management, finance and other essential business topics. But the College of Business also has reached far and wide to a network of successful Bulldogs who can lend their expertise and experiences to MSU students from across the country.

Wade Patterson of Huntsville, Alabama, is a 1983 MSU electrical engineering graduate who learned about business through his own experiences establishing, running and selling companies, as well as patented technologies he created.

“I learned everything not to do,” he said. However, through trial and error, Patterson ultimately became a very successful businessman with positive business exits, including his 2012 sale of Synapse Wireless, a company that specializes in Internet of Things technology.

Patterson established the Bulldog Angel Network to give MSU students a level playing field with those starting companies in areas such as Silicon Valley, where venture capital is more readily available. The network also is open to alumni pitches.

“I wanted to set up a network of individuals to angel invest. When start-ups come through the VentureCatalyst program at MSU, you end up with business plans and business concepts that are pretty well planned,” Patterson explained.

By the time a company completes VentureCatalyst and is ready to approach angel investors, Patterson has already met with the company and is putting his money where his mouth is. When he met Ferguson and began to understand the market outlook for WISPr Systems, he wanted to do even more. He has met with Ferguson regularly, traveling to the Starkville campus from Huntsville about once a month for meetings and mentoring sessions.

Ferguson said Patterson and others in the Bulldog family have helped him get WISPr Systems where it is in a relatively short time. The company is now valued at nearly $2 million. While the sky’s the limit on growth, Ferguson recognizes the blood, sweat and tears it takes to achieve success.

“Competition is going to come quickly, but if you do things right on the front end, you’ll be all right,” he said.