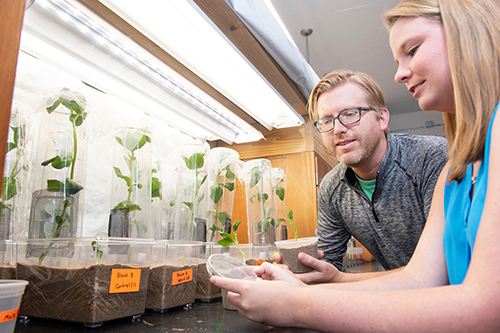 STARKVILLE, Miss.—A recent study by Mississippi State University researchers shows that contrary to what rock band AC/DC famously hypothesized in its 1980 classic song, rock and roll is noise pollution and can have a harmful effect on environmental systems.

Researchers in MSU’s Department of Biological Sciences and Department of Wildlife, Fisheries and Aquaculture exposed ecosystems of lady beetles, aphids (small agricultural pests) and soybean plants to rock music, country music and more conventional urban sounds to test the effects of noise on an environment. As part of the experiment, ecosystems “shook all night long” to AC/DC’s “Back in Black” album, repeated for two consecutive weeks. The album contains the band’s hit “Rock and Roll Ain’t Noise Pollution.”

The results of the study showed that when exposed to rock music and urban sounds, lady beetles became less effective predators, which resulted in higher aphid populations and lower biomass for soybean plants. The research was published this month in Ecology and Evolution. Brandon Barton, the paper’s lead author and avid AC/DC fan, said he was “thunderstruck” by the results.

“It was hard on us,” Barton said. “We hate to disagree with AC/DC. We don’t think it’s noise pollution, but the lady beetles do. That’s an important distinction.”

Barton, an assistant professor in MSU’s Department of Biological Sciences, explained that while AC/DC’s music is not a serious environmental threat, the study offers a “proof of concept” that shows sound can alter one organism, which could then have effects on others.

“We did another experiment where we looked at the sounds of jackhammers, airplanes taking off and those sorts of things,” Barton said. “That also reduced predation rates for the lady beetles. The volume of this is about the equivalent of a tractor on a farm, so it’s not something completely unrealistic. Farm noise could actually reduce the efficiency of natural predators at controlling pests. If that happens and the pests take off, you might have to spray more chemicals. So it could be a soundscape that’s influencing how many chemicals we have to use because it changes the efficiency of the predator.”

The experiment was designed in part to help recruit undergraduate students to Barton’s lab. However, he quickly learned that most students knew some of AC/DC’s songs through things like football games, but knew relatively little about the band. Mariah Hodge, a self-described country music fan, worked on the experiment as an undergraduate student and is the second author of the paper. Now a master’s student in biological sciences, the Russellville, Alabama native came to Mississippi State from Northwest Shoals Community College in Alabama.

“It’s cool to be able to do research as an undergrad that I could actually put forth a lot of effort into,” Hodge said. “I thought I wanted to be a veterinarian, which is why I came to Mississippi State. I realized I needed some experience before I went to vet school, so I decided to get involved in research and discovered once I joined the lab that I love biology in all aspects.”

As a master’s student, Hodge is studying the effects of mass mortality events on ecosystems with lady beetles and aphids. She plans to become a biology instructor after she graduates in December. Hodge notes that her preferred style of music had no detrimental effects on the ecosystem during the noise pollution experiment.

“AC/DC is not something I listened to all the time,” Hodge said. “I’m a big country music fan, so that’s why we decided to try country music. However, my music was not noise pollution. Maybe country music is the way to go.”

The researchers said it remains unclear why country music had less of an effect on the ecosystem than AC/DC and a playlist of rock music. Barton said most sound pollution studies focus on individual populations such as deer, but scientists know little about the way it affects insects and, in turn, the ecosystems they inhabit.

“Obviously we’re having fun with this experiment and testing the AC/DC hypothesis, but really what we wanted to also show was that sound pollution or anthropogenic sound affecting one species can then effect multiple species in the food web,” Barton said.

The paper is dedicated to AC/DC guitarist Malcom Young, who passed away while the manuscript was in progress. In addition to Barton and Hodge, the authors include current and former MSU biological sciences students Cori J. Speights of Mexia, Texas, and Anna M. Autrey of Wetumpka, Alabama; biological sciences associate professor Vincent Klink; and Marcus Lashley, an assistant professor in MSU’s Department of Wildlife, Fisheries and Aquaculture.

Editor's Note: Barton has written an article on this study for The Conversation, which can be re-published under a creative commons license. The piece is available at https://theconversation.com/rock-n-roll-is-noise-pollution-with-ecological-implications-that-can-spread-through-a-food-web-98998.