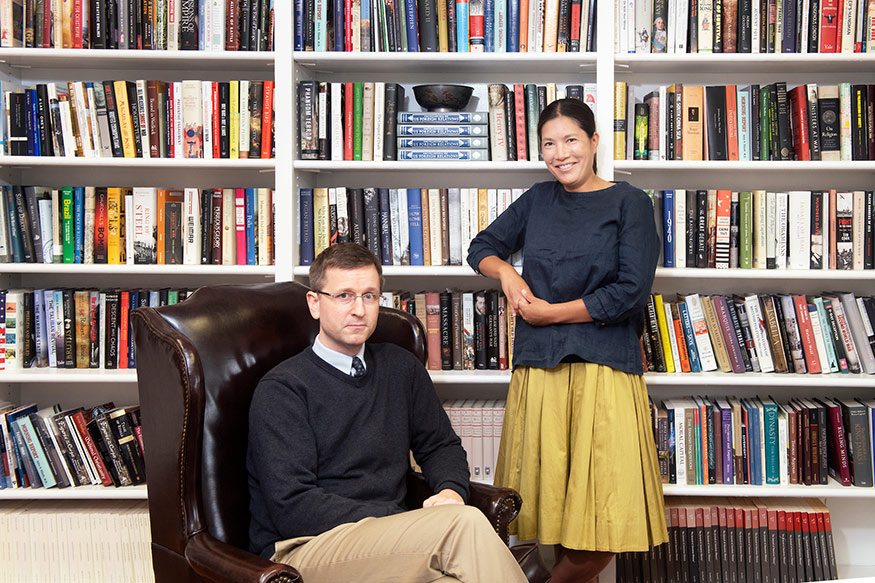 STARKVILLE, Miss.–Mississippi State’s Department of History is making history of its own as two faculty members recently have been named the first co-editors of their field’s flagship society.

Founded in 1924, the History of Science Society is the oldest and most prominent organization dedicated to understanding science, technology and medicine and their interactions with society in a historical context. Alexandra “Alix” Hui and Matthew Lavine, both associate professors in MSU’s history department, will work with the two international journals HSS produces ─ Isis and Osiris. These publications promote research and teaching in the history of science. The organization also circulates a quarterly newsletter providing information about professional meetings, announcements of fellowships, prizes and awards and notices of employment opportunities.

Hui and Lavine have begun a one-year transition and will formally assume the editorship on July 1, 2019, with their term running through June 2024.  HSS includes more than 3,000 individual and institutional members around the world.

“At Mississippi State we have an unusually ‘deep bench’ in the history of science and its related fields,” Lavine said. HSS cited MSU’s “strong community of scholars as part of their reasons for selecting us,” Lavine said, noting he and Hui have the opportunity to work alongside several history department colleagues, as well as several faculty in the philosophy of science, the sociology of science and in the science departments themselves.

Referring to the editorship as “an opportunity to inform the direction of our field,” Hui said Isis is the “flagship journal” in the history field and it is “an enormous privilege” to be in this position.

Alan Marcus, professor and head of the history department, said Hui and Lavine are both in the “early half of their careers” and noted that a joint editorship at such an early stage in their profession is unprecedented.

“Previous editors have been toward the end of their careers,” Marcus said. “Lavine and Hui bring energy, vibrancy and extensive experience in the newer questions and approaches to the history of science to the journals.”

“In a relatively small field, that makes our department one of the largest concentrations of historians of science in the country,” Lavine said.

“As the first co-editorship, and by far the youngest editors ever selected, it is also an opportunity to demonstrate both what [our] generation can do, as well as the benefits of a co-editing arrangement,” Hui said.

Another benefit to the editorship is the experience it affords MSU history graduate students, Marcus said.

“Now in its 109th year, Isis has been edited out of Harvard, Penn, the University of Chicago, the University of Wisconsin, Cornell, Toronto and Utrecht. The editorship comes with the opportunity—obligation, really—of MSU history graduate students to go to the Science History Institute—a large consortium of Philadelphia-based scholars and manuscripts—each semester and work with the collections and people there. So we now have organic ties to major research collections and opportunities as a matter of course,” Marcus said.

Hui said the history department’s graduate students will work closely with her and Lavine, adding “this will be a good time to show them off to the world.”

“The history of science is a very energetic, ever-changing field, and as editors of the History of Science Society’s publications, we’ll be in a position to help bring to light scholarship with enormous relevance to contemporary issues in society,” Lavine said. “A big part of our job will be bringing the work that historians of science do to a broader audience.”

Hui and Lavine’s appointment as co-editors follows an 18-month search in which HSS’s committee on publications sought and encouraged nominations, vetted proposals and engaged in multiple site visits.

Hui received her Ph.D. in 2008 and master’s degree in 2003, both in history from the University of California at Los Angeles. She earned a bachelor’s degree in physics in 2001 from Pomona College in Claremont, California.

Her current research examines the co-development of new listening forms and background music technology and the standardization of listening practices among field scientists in 20th-century America and Germany.

A native of Davis, California, Hui leads the history department’s node of excellence research group in the history of science, technology and medicine.

Lavine received his Ph.D. in 2008 and master’s degree in 2002, both in the history of science from the University of Wisconsin-Madison. He earned his bachelor’s degree in music from Kenyon College in 1997.

Lavine’s research explores the intersection of science and American popular culture in the late 19th and early 20th century.

MSU’s Department of History is a nationally ranked, research-extensive, Ph.D.-granting department. With a main concentration on the history of the United States and Europe since 1650, the department also offers students aspects of world history. MSU historians seek to create new knowledge and interpretations in the field of history and disseminate their knowledge to undergraduate and graduate students.

Board of Trustees votes against system-wide COVID vaccine mandate