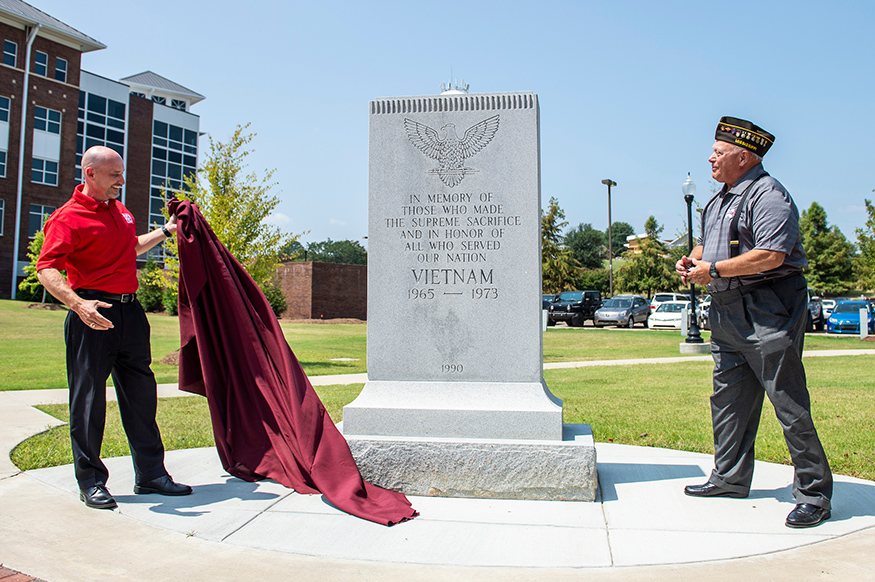 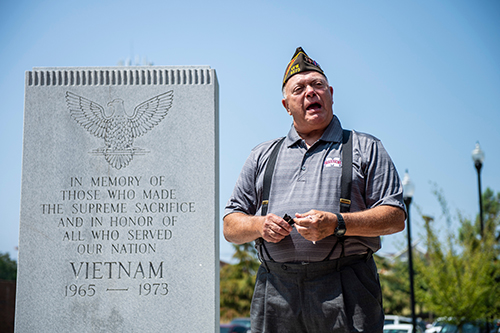 STARKVILLE, Miss.—Mississippi State’s memorial to those who served in the Vietnam War now stands next to the university’s center that serves America’s veterans.

MSU’s G.V. “Sonny” Montgomery Center for America’s Veterans held a “re-unveiling” for the memorial in its new location outside of Nusz Hall on Friday [Aug. 24]. The unveiling was part of a welcome back barbecue, sponsored by local American Legion and Veterans of Foreign Wars chapters, for student veterans.

The memorial was recently moved from its former site between Magruder Hall and Harned Hall. A local Vietnam veteran, Bob Kirkland, suggested moving the monument to university administrators, and the move was ultimately approved and supported by MSU President Mark E. Keenum.

During Friday’s ceremony, both Kirkland and Lt. Col. (Ret.) Brian Locke, director of the Montgomery Center for America’s Veterans, said that due to the controversy surrounding the war in Vietnam, returning veterans were not always treated with the same respect that they are now.

“Moving it here represents our student veterans, because many of those who served in Vietnam, once they finished serving, they came to the university,” Locke said. “Many of them didn’t talk about their service because of the stigma that was there. Now we can bring it here, show our newer generation of veterans and let them learn a little bit about the sacrifices. As the Center for America’s Veterans, we want to do everything we can to recognize veterans, past and present, right here in our own building.”

The gray granite monument was built after years of MSU Student Association-led fundraising efforts in the 1980s. In 1986, former MSU student Mark Taylor, whose father served in Vietnam, came up with the idea for a Vietnam War memorial after seeing the World War I “Dough Boy” statue on campus. University Archives records show former U.S. Rep. Sonny Montgomery was among those that supported the fundraising drive. A dedication ceremony for the memorial was held in January 1991.

The text of the memorial reads, “In memory of those who made the supreme sacrifice and honoring all who served our nation—Vietnam 1965-1973.” Over 600 Mississippians were killed in the Vietnam War, according to the U.S. National Archives. Thousands more fought in the conflict. The war’s impact was felt among the MSU community as students, staff and alumni enlisted to serve their country.

Kirkland graduated from MSU in 1966 and joined the U.S. Marine Corps. He went on to complete two tours of duty before returning to MSU and Starkville. Kirkland said fellow Vietnam veteran and MSU alumnus Willard Wayne Round brought the campus Vietnam War memorial to his attention. Shortly afterward, Kirkland contacted the university and suggested moving it.

“I just want to thank the university for setting this up right for all of the Vietnam veterans,” Kirkland said.

The Vietnam War memorial now stands among other tributes to the men and women of the U.S. Armed Forces. The Col. John Ware Thames Tribute to America, a prominent flag display at the north entrance of Nusz Hall, recognizes all branches of the U.S. military and those that are prisoners of war or missing in action.
Several Vietnam veterans were in attendance for Friday’s ceremony. Locke thanked them for supporting MSU’s veteran community and for their years of service in Vietnam.

“As a veteran, you guys mean the world to me,” Locke said. “The things you went through are very different than the experiences I had in combat. Even coming back, I was treated very well. There were celebrations and parades and those kinds of things. You guys obviously didn’t receive that. This is another opportunity to say thank you for everything you’ve done.”

MSU’s Montgomery Center for America’s Veterans provides support to the university’s veterans and their dependents. Nusz Hall, the new home for the Montgomery Center that was completed in 2016, provides 7,500-square-feet of student support spaces, a computer lab, study rooms, a meeting area and administrative offices.

For more on MSU’s services available to veterans, visit www.veterans.msstate.edu.