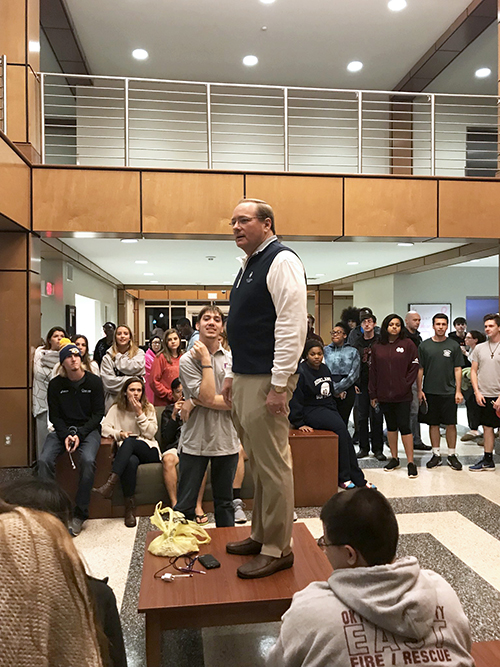 STARKVILLE, Miss.—Mississippi State officials are assisting those impacted by a Sunday [Oct. 21] evening fire in a university residence hall.

Approximately 60 students were impacted by the fire, and university officials have provided and will continue to provide accommodations for those students. Those accommodations include temporary housing at a local hotel, as well as academic and parking accommodations.

The fire is believed to have started when an electrical fire sparked and caught bed linens on fire, but an official ruling from the fire marshal remains pending. When the fire began, a student pulled the fire alarm and notified MSU Housing and Residence Life officials, triggering responses from local emergency officials and the MSU Crisis Action Team. Following university protocol, the building was promptly evacuated. Students whose rooms were not impacted by fire or water returned to their rooms on Sunday night.

MSU President Mark E. Keenum addressed Oak Hall residents on Sunday and told them that the university would do everything in its power to help students deal with the challenge.

“We are fully committed to helping those impacted by this fire in any way we can,” Keenum said. “The safety of our MSU family is a top priority, and I am grateful that nobody was hurt during this incident. I would like to thank the students, staff and emergency officials involved for their efforts in minimizing the harm caused by this fire.”