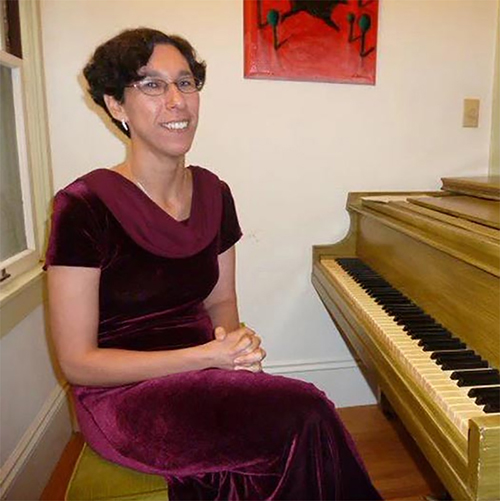 “I’ve heard a lot about the festival from various friends who have been there as performers or audience members, and everyone has raved about how amazing it is. I can’t wait to experience it for myself,” said Migachyov, who began her classical piano training at age 5.

After immigrating to the U.S., Migachyov chose not to pursue music professionally for many years. In 2005, however, she changed her mind after seeing an advertisement for the San Antonio Ragtime Society on a supermarket bulletin board. She attended one of the meetings and was instantly hooked.

A year later, Migachyov composed her very first rag, the Purple Chicken Rag, and premiered it at the 2006 Scott Joplin Festival in Sedalia, Missouri. Since then, she has composed more than 35 rags and has performed at such events as the Eau Claire Ragtime Festival in Wisconsin and the West Coast Ragtime Festival in California.

“Ragtime has taken me to very unexpected places, from Sedalia to Buenos Aires,” said Migachyov, who now resides in California. “In 2016, I was able to attain a goal I didn’t even know I had by performing a ragtime recital at Carnegie Hall.”

Migachyov said there’s no denying piano is her instrument of choice, though she has tried her hand at others over the years.

“I played the clarinet in high school, very badly, and haven’t touched it since. I also own a theremin and can make horrible noises on it,” she joked.

Migachyov agreed that the Templeton festival plays an important role in exposing students and the general public to ragtime and other genres that have been as influential on the music industry as they are fun to hear.

“Ragtime is happy music,” she said. “Everyone needs a bit more joy in their lives; listening to happy music is a good way to start.”

Migachyov is scheduled to give a solo talk in the Templeton Museum at 1:30 p.m., March 29. She also will join her fellow festival performers for Friday and Saturday evening concerts in the mainstage theater at McComas Hall.

“Larisa is hailed as the most prolific female composer of rags in history and has a truly poetic, flowing touch on the keys,” said MSU Associate Dean of Libraries Stephen Cunetto.