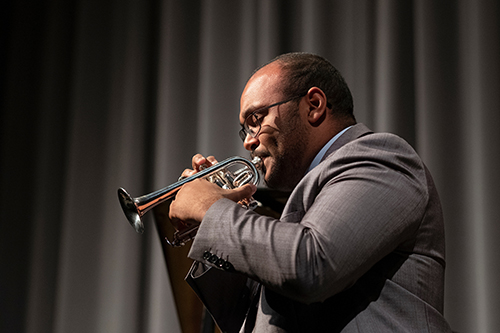 STARKVILLE, Miss.—No matter the genre, music has the power to impact lives in unforgettable ways.

Mississippi State University Libraries and the Department of Music recently paid tribute to a young musician with this kind of influence by honoring another who will carry on his legacy.

Studying the trumpet for more than seven years, Gray has honed his craft as an active performer with MSU’s Trumpet Consort, Dixieland and Jazz ensembles, and Symphonic and Concert bands, among other groups. He also is engaged in research on music education and plans to pursue a graduate degree in wind conducting following graduation.

Chip Templeton, festival co-chair and son of festival namesake Charles H. Templeton Sr., presented Gray with a certificate and check during the recent concert. Templeton, who also serves as director of the MSU College of Business’s Small Business Development Center, said audiences were captivated five years ago when witnessing the talents of Docher, who served as the festival’s first student performer.

“Keyone really touched our hearts and our lives that night, so we wanted to honor him, not just for his beautiful music, but for what he stood for. This award helps us carry on the tradition that Keyone laid out for us,” Templeton said.

After receiving his award, Gray performed German Baroque composer Georg Philipp Telemann’s “Air de Trompette” on piccolo trumpet. He received piano accompaniment from MSU music professor Rose Sebba, who holds the prestigious Steinway Artist designation. With more than 40 years of experience in piano performance, Sebba is among a select group of highly esteemed musicians from around the world who have chosen to play exclusively on pianos produced by internationally renowned piano manufacturer Steinway & Sons.

Docher’s parents, Charles and Tammy Docher, also attended the concert, describing it as a special occasion they look forward to every year.

“Keyone’s love for music was powerful,” Charles Docher said. “He would get on his piano and play into the night, and I could tell when he hit a wrong note because he would come back and correct it. He was a professional. He just loved to get it right.”

“He spent so much time playing, and he believed in education and inspiring young people to do the right thing,” Docher continued. “We want to thank the Templetons, Dr. Sebba and everybody in the Mississippi State community for the support.”

For more on MSU Libraries, visit http://library.msstate.edu; MSU’s College of Education and its nationally accredited Department of Music, www.educ.msstate.edu and www.music.msstate.edu.

MSU's McKinney in The Conversation: Parenting styles vary across the US