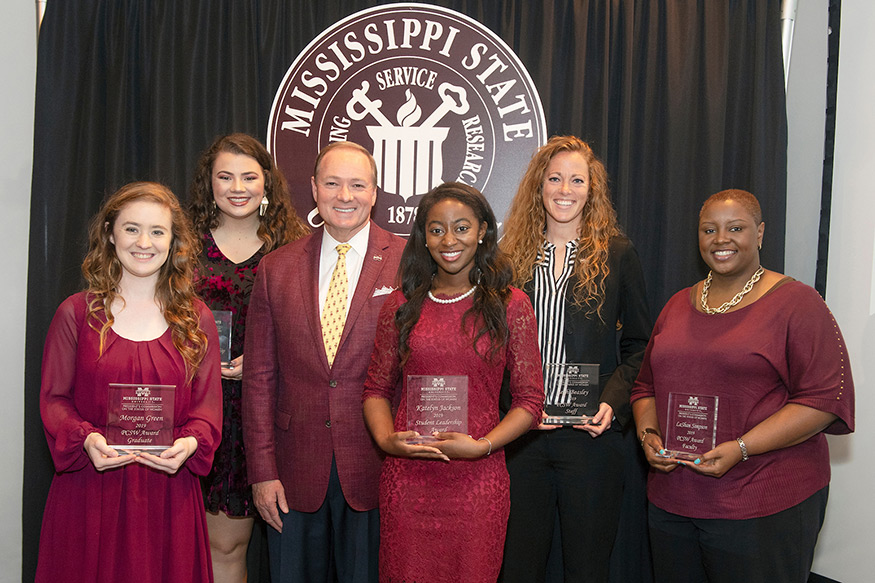 STARKVILLE, Miss.—Five outstanding women were recognized at Mississippi State Wednesday [April 10] during the annual President’s Commission on the Status of Women Awards Ceremony.

MSU President Mark E. Keenum said many women perform with excellence at the university’s highest levels and are integral to the institution’s administration and operation. More young women are choosing to enroll at Mississippi State every year, he added.

“We’re blessed to have outstanding women in key, impactful leadership positions,” Keenum said, emphasizing that the world needs more leaders who are intelligent, courageous, visionary and empathetic. “In other words, we need more women leaders,” he said. Keenum congratulated each 2019 honoree as he presented them with their award.

This year’s PCSW Award recipients include:

—Morgan K. Green, Outstanding Graduate Student Recipient. An MSU mechanical engineering alumna from Olive Branch, Green will graduate this semester with a master’s degree in the same field and will continue in an MSU doctoral degree program. An avid supporter of women, Green has been involved with the Mechanical Engineering Ladies Organization, helping plan social and outreach events. In 2016, as part of a capstone project for the Montgomery Leadership Program, she created Project ENspire to reach 4th- and 5th-grade girls and teach engineering through fun, hands-on activities.

—C. LaShan Simpson, Outstanding Faculty Award Recipient. An assistant professor of agricultural and biological engineering, Simpson joined MSU’s faculty in 2013. The South Carolina native who received her doctoral and bachelor’s degrees from Clemson University has long been engaged in empowering women in science and engineering. She is passionate about K-12 outreach and participates in numerous Bagley College of Engineering camps. She also supports the Boys and Girls Clubs of America and offers research opportunities in her laboratory. Simpson established the Biomedical Engineering Association of MSU within her department.

—Leah Beasley, Outstanding Staff Award Recipient. Serving as the executive senior associate athletic director for external affairs at MSU, Beasley also came to the university in 2013. During her time on campus, Beasley’s initiatives have led to record numbers in revenue and attendance. She previously served in athletic leadership roles at Louisiana Tech University, where she graduated with a bachelor’s degree in marketing and business administration and a master’s in business administration. Beasley has mentored and consistently supported students and professionals in her area.

—Shelby B. Baldwin, Student Leadership Award. A senior marketing major from Ridgeland, Baldwin is empowering and equipping the next generation of women leaders. She founded the Undergraduate Women in Business organization at MSU and has grown the small club into a network of more than 170 MSU women. The organization hosted nationally known guest speakers and led trips to Harvard University’s Undergraduate Women in Business Convention. Baldwin has served in numerous College of Business leadership positions and was named Miss MSU in 2018. In addition to serving the college as its first student marketing intern, she has launched her own company, Rocketing Media, with support from MSU’s Center for Entrepreneurship and Outreach. She will pursue this business endeavor full-time after graduation.

—Katelyn Jackson, Student Leadership Award. A junior biological sciences/pre-medicine major from Starkville, Jackson is a graduate of the Mississippi School for Mathematics and Science. While in high school, she began research under the supervision of Associate Professor Justin Thornton in MSU’s Department of Biological Sciences, and she continues her work there now. During her freshman year at MSU, she was accepted into a summer research program at Weill Cornell Medical College, and she spent the summer after her sophomore year doing research at the New York University School of Medicine. Jackson is vice president of the Montgomery Leadership Program, and she teaches chess at the Starkville Boys and Girls Club.

Created in the late 1970s, PCSW advises MSU’s president on issues affecting the status and the role of women on campus. The organization provides informational and educational programming to address the concerns of university women, and the awards program is a longstanding annual event to honor advocates for the well-being, development and advancement of all women on MSU’s campuses and in the surrounding communities.