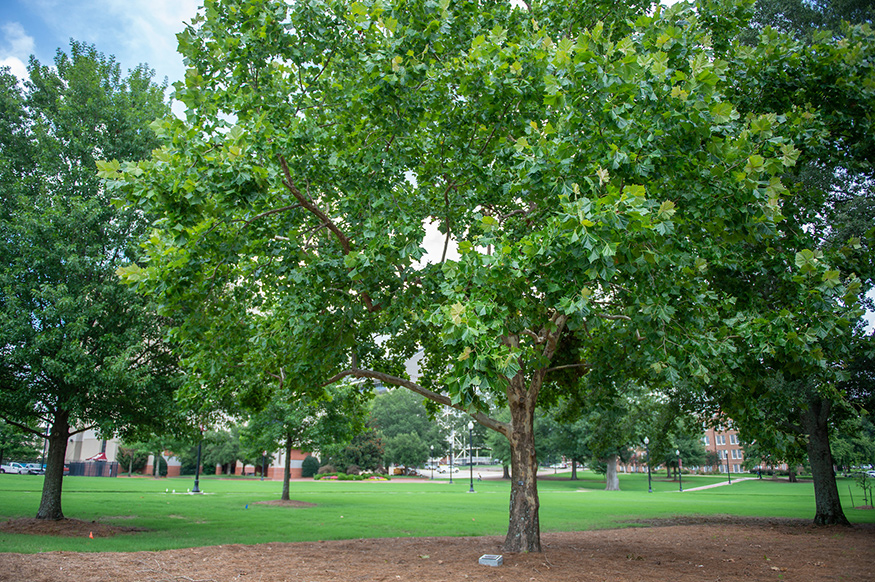 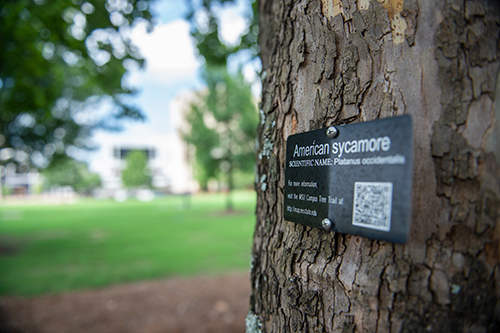 STARKVILLE, Miss.—While NASA’s Kennedy Space Center celebrates the 50th anniversary of its Apollo program this summer, Mississippi State is recognizing its famed “Moon Sycamore” tree grown from one of 500 seeds that accompanied the Apollo 14 astronauts into the cosmos in 1971.

Located on the west side of the Junction, the celebrated sycamore was planted at MSU after its seed was used in scientific experiments conducted by astronaut Stuart Roosa aboard the command and service module Kitty Hawk.

In fact, from the seeds of MSU’s tree, many new Moon Sycamore trees have been grown and 12 of them were planted this spring at Kennedy Space Center as NASA began its Apollo anniversary celebration. These new trees are grown by the Tennessee-based nonprofit American Heritage Trees, an educational and environmental organization that formed a partnership with MSU and its campus landscape department in 2014 to collect seeds from the university’s sycamore, a collaboration that continues to this day.

“We have many interesting trees on our Campus Tree Trail, but the Moon Sycamore’s historical significance makes it one of my favorites,” said Bart Prather, MSU’s associate director of campus landscape. “To know that it originated from a seed that went to the moon and back and that it now has offspring planted at the Kennedy Space Center is pretty neat. It gives Mississippi State a unique way to be a part of the Apollo anniversary that NASA is celebrating.”

Tom Hunter, who founded American Heritage Trees with his wife Phyllis in 2013, said the Apollo program was a “great achievement in American history.”

“These 12 trees we’ve grown—one for each of the 12 astronauts that went on the Apollo 14 mission—are living symbols of that history,” he said. “We encourage people to visit the Moon Sycamore on the Starkville campus. This historic tree is right there in the Junction, so when people come to campus for State football games, they can go see it.”

Every year, MSU collects and sends a few seed bulbs from the Moon Sycamore to American Heritage Trees where the seedlings are grown, according to Tom Hunter. The organization then sells them and redistributes a portion of those sales back to Mississippi State to enhance its Campus Beautification Fund.

Once owned by the seventh U.S. President Andrew Jackson, the farm houses a nonprofit nursery from which individuals, schools and organizations can purchase trees associated with key figures and events in U.S. history.

“Our work is undertaken in partnership with the parent tree owners, like MSU, from around the country,” Tom Hunter said. “As a nonprofit, we hope to serve as a catalyst to educate Americans about their rich national heritage and provide an opportunity to own a piece of American history.”