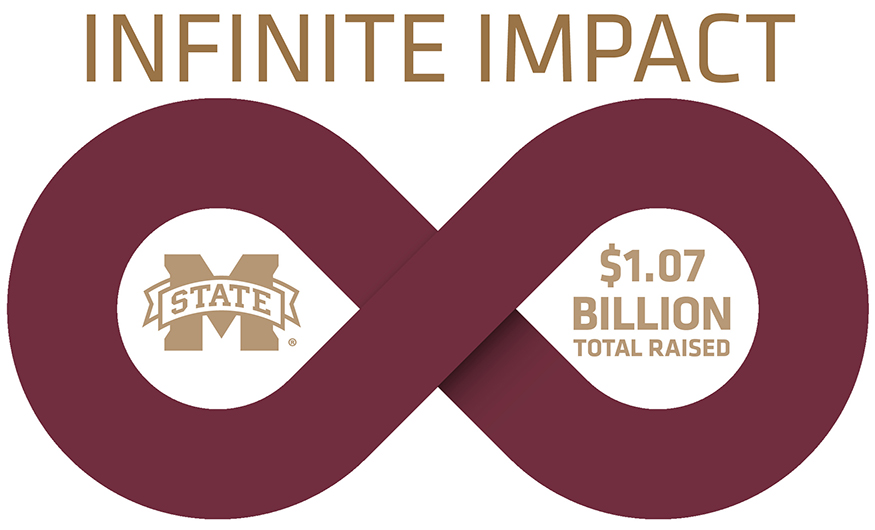 STARKVILLE, Miss.—Infinite Impact: The Mississippi State University Campaign concluded its decade-long run in June with an unprecedented $1.07 billion in outright gifts and pledges, including $285.2 million raised in deferred gifts. The monumental support of 72,747 generous contributors enabled Mississippi State University to reach this historic peak of philanthropy and exceed a $1 billion milestone previously never achieved by an educational institution in the state of Mississippi.

The ambitious campaign’s timeframe ran consecutively with the successful tenure of MSU President Mark E. Keenum, bringing stability in MSU leadership. Keenum was inaugurated as MSU’s 19th president in January 2009, and the MSU Foundation launched the campaign in July 2010.

“We are forever grateful for the generosity of alumni, friends, foundations and corporations who value the university’s contributions to Mississippi and the nation and share its vision. The historic Infinite Impact campaign brings vast support for significant advances in education and research that will benefit our society and economy and further grow the national reputation of our university,” said Keenum.

Infinite Impact gifts benefited MSU’s core group—its students and faculty—along with ushering in critical support for facilities and programs. Priority goals for Infinite Impact secured $247.4 million in scholarship support, including 75% growth in new endowed scholarships; $78 million for faculty support, including 88% growth in endowed positions; $121.4 million for new facilities and improvements for existing facilities; and $626.5 million for annual and program support.

“Infinite Impact brought impressive growth of donors, ushering in greater alumni participation, averaging 18.2% over the life of the campaign, and growth in new supporters, some 37,009 making their first gift to the university,” said John P. Rush, the university’s vice president for development and alumni who serves as MSU Foundation president and CEO. 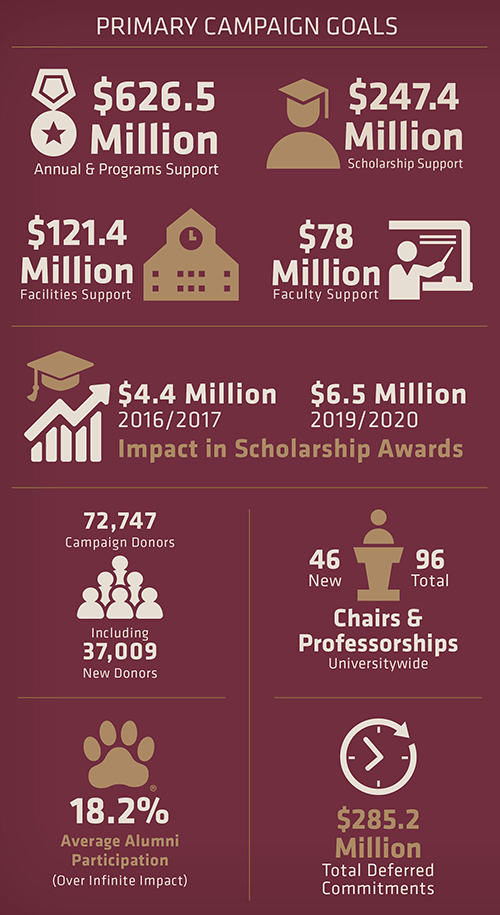 —More than $1 million was secured for an endowment to perpetually support MSU’s Phi Beta Kappa Chapter.

—Support for the university’s most competitive four-year awards, the Presidential Scholarships, totaled $6.9 million.

—Gifts totaled $7.8 million for the Promise Student Support Program as it offers financial and mentorship assistance to students from economically challenged backgrounds.

—Gifts for the Mississippi Excellence in Teaching Program (METP) bring full scholarships to select education majors who will devote their first five years to teaching in Mississippi.

—Among new endowed positions are a cybersecurity chair; an applied big game research and instruction chair; a southeastern cattle management professorship; and an endowed professorship to encourage diversity and inclusiveness among faculty, among others.

—A new Partnership Middle School, built at MSU in part with gifts, will impact long term education of sixth and seventh graders in the Starkville Oktibbeha School District and be an innovative research site for educators.

—New facilities possible with gifts and other support include the Old Main Academic Center, Nusz Hall, the Richard A. Rula Engineering and Science Complex, Nusz Park, and the Leo Seal Jr. Football Complex.

—A new kinesiology program at MSU-Meridian helps students make an immediate contribution to the local workforce and prepares them for more advanced health care areas.

—Gifts for the MSU Center for Entrepreneurship and Outreach provide valuable assistance for business start-ups and enhance programming and outreach as a universitywide resource.

For its campaign fundraising success, MSU recently was honored by the Council for Advancement and Support of Education (CASE) for outstanding efforts in fundraising and development, receiving the 2020 CASE Educational Fundraising Award for Overall Improvement, as one of only five universities nationwide to be named in the Public Research/Doctoral Institutions with Endowments Over $215 Million category.

At campaign close, the university’s endowment stands at approximately $521 million, up from $291.3 million at the start of Infinite Impact.

The MSU Foundation can be found online at www.msufoundation.com.