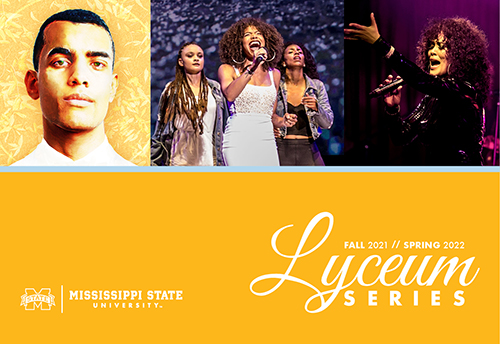 MSU’s long-running performing arts program opens with Paragon Ragtime Orchestra on Dec. 1. Audiences will be entertained across a spectrum of theater, dance and vocal performances that also include a concert featuring the Grammy Award-winning music of Whitney Houston and Aquila Theatre’s production of the American classic, Jazz Age novel “The Great Gatsby.”

Ongoing Lyceum patrons can renew their season tickets until July 11, and new season ticket packages can be purchased July 12-30. Mini-series tickets will be on sale Aug. 3-20; individual tickets, Aug. 23.

Individual tickets are available for the general public at $30 for adults; $25 for MSU employees and senior citizens; $10 for children age 3-12 or with school I.D./uniform; and free for MSU students with valid student I.D.

Purchases can be made online at www.lyceum.msstate.edu. If available, individual tickets may be purchased at the door before each program.

Doors open approximately 30 minutes before the curtain rises at 7 p.m. for all shows.

—Feb. 15, Showtime Australia presents “The Greatest Love of All: A Tribute to Whitney Houston Starring Belinda Davids.” Featuring the breathtaking vocals of South African songstress Davids accompanied by a six-piece live band and dancers, the critically acclaimed live concert celebrates one of the world’s most revered singers.

—Feb. 23, Aquila Theatre presents F. Scott Fitzgerald’s “The Great Gatsby” as part of its  2021-22 U.S. National Tour. The company is one of the foremost producers of classical theater in the United States and has performed at the White House and for the U.S Supreme Court.

—March 1, Los Angeles tap dance band Syncopated Ladies, created by Emmy-nominated tap dancer and choreographer Chloe Arnold. The group has worked with superstar Beyoncé, performed on “So You Think You Can Dance” and “Good Morning America” and at the U.S. Open, and has viral videos amassing more than 50 million views.

—March 9, ETHEL string quartet with Grammy Award-winning Native American musician Robert Mirabal. Established in New York City in 1998, ETHEL is regarded as one of America’s most adventurous string quartets and has been described by The New York Times as “indefatigable and eclectic.”

In addition to these five productions, the Performing Arts schedule includes shows presented by MSU’s jazz, symphonic and community bands, the Wind Ensemble, MSU Choral concert groups, as well as Theatre MSU. Details on these performances can be found online at www.music.msstate.edu or by phone at 662-325-2713.

For more MSU Lyceum Series information, contact the Center for Student Activities at 662-325-2930, visit www.lyceum.msstate.edu or email lyceum@msstate.edu. To make a contribution to the Lyceum Series, contact Lynn Durr at 662-325-8918.

Bulldog Bash headliner announced, opener to be decided in Friday’s Battle of the Bands