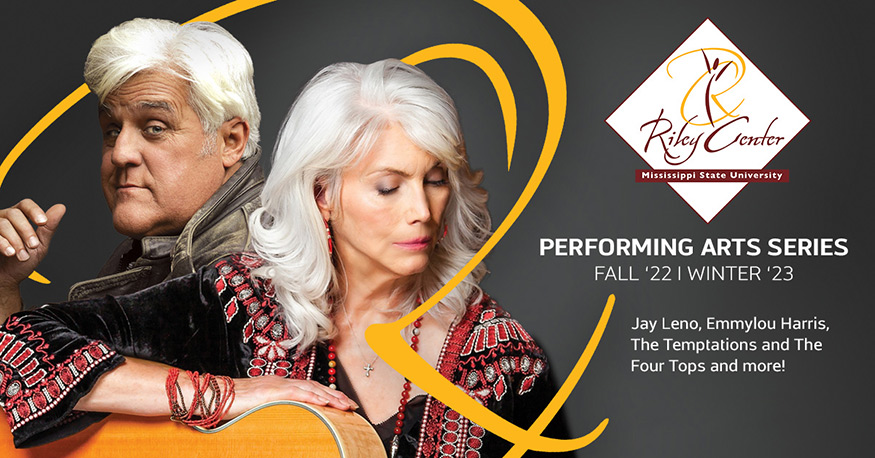 MERIDIAN, Miss.–The Mississippi State University Riley Center for Education and Performing Arts (MSU Riley Center) announces a new slate of shows for the 2022-2023 Fall-Winter season. The season is full of headlining musical acts, complemented by a Broadway star and a ubiquitous comedian.

The season kicks off on September 17 with The Gatlin Brothers, followed by Jessica Vosk on September 30. Best known as Elphaba, the green-skinned witch from the Broadway hit Wicked, Vosk’s powerhouse vocals are sure to shine when matched with the theater’s unparalleled acoustics. Jay Leno, a man who needs no introduction, will deliver his side-splitting standup on Friday, October 7.

Blurring the lines between funk, soul, R&B, and psychedelic rock, New Orleans musical legend Trombone Shorty and his band Orleans Avenue will take the stage on November 19. Released in the spring of this year, Lifted is his first new album in five years. After much anticipation, the album is an excellent indicator of what to expect on stage.

The beloved singer-songwriter and folk icon Emmylou Harris will perform with her band, filling the MSU Riley Center’s Grand Opera House theater with sage wisdom and eloquent lyrics like only she can on Friday, December 9. Rounding out the season on January 21, The Temptations and The Four Tops are sure to pack the house with Motown mania.

The MSU Riley Center announces this season on the heels of an impressive streak of sold-out shows, including an add-on performance by Bob Dylan in the spring and Boz Scaggs on July 23. The theater’s beauty is only rivaled by its acoustics, making it an idyllic venue for performers and patrons alike.

“We are selling more tickets each season than we ever have, far exceeding pre-pandemic levels,” said Dr. Terry Dale Cruse, Associate Vice President and head of Mississippi State University-Meridian Campus. “While we’ve been steadily presenting shows for over 15 years now, the energy and renewed interest in downtown and our community’s collective arts and culture offerings is palpable. To anyone considering a show or coming downtown for a weekend, my advice is do not hesitate.”

Since the opening of the MSU Riley Center in 2006, downtown Meridian has seen an influx of investment, specifically in arts and culture. The addition of the Mississippi Arts + Entertainment Experience and the new Mississippi Children’s Museum-Meridian provides unique enrichment opportunities for adults and children that complement the MSU Riley Center’s performing arts series and annual school shows. The grand opening of the Threefoot Hotel at the start of 2022 firmly positions Meridian as a destination for arts and culture across the state and region.

Season subscriptions to the MSU Riley Center’s 2022-2023 Fall-Winter Performing Arts Series are on sale now and start at $210 and go up to $540 per person. Special mini packs are also available, allowing patrons to purchase a bundle of three predetermined shows, claiming highly sought-after seats ahead of individual ticket buyers. Ranging from $95 to $340 per person, mini packs go on sale on August 1. Ticket prices to individual shows vary, starting at $20 and going up to $150 per ticket based on performance and seat selection. Ticket sales to individual shows begin on Tuesday, August 9, after a one-day presale to Friends of the Lady members on Monday, August 8. For more information and to purchase, visit www.msurileycenter.com or call 601.696.2200.

The MSU Riley Center thanks The Riley Foundation, The Phil Hardin Foundation, Mississippi State University, and Friends of the Lady members. Their continued support helps make these shows possible.

Celebrating their 67th anniversary in the music business, Larry, Steve, and Rudy Gatlin thrill audiences with one of the greatest-ever lists of greatest hits. The Texas-born brothers first performed as gospel-singing children. Their seamless vocal harmonies launched a career that has generated a Grammy Award, three Academy of Country Music Awards, and 33 top 40 records. Their breakthrough 1976 single “Broken Lady” kicked off a string of hits including “All the Gold in California,” “Houston (Means I’m One Day Closer to You),” “I Don’t Wanna Cry,” “I Just Wish You Were Someone I Love,” “Statues without Hearts,” “Love Is Just a Game,” and “Night Time Magic.”

Broadway comes to Meridian in the person of Jessica Vosk. The singer and actress became one of the most celebrated Elphabas (the green-skinned witch) in the long run of the musical Wicked. Last November, she debuted at Carnegie Hall in a sold-out solo performance called “My Golden Age,” celebrating the worlds of pop, rock, and musical theater. Stephen Mosher of Broadway World called it “the event of the season.” She’s now taking the show on the road, showcasing her powerhouse voice and sidesplitting sense of humor. For every performance, Vosk picks a fan via social media to perform with her on stage. Expect an enchanting evening.

Acclaimed TV show host, comedian, children’s book author, corporate speaker, voice-over artist, car enthusiast, and philanthropist Jay Leno has earned the title of hardest-working man in show business. He’s also possibly the funniest. Even while hosting The Tonight Show with Jay Leno for two decades, he performed more than 100 comedy shows a year. This fall, he and co-host Kevin Eubanks will bring back the classic comedy TV game show You Bet Your Life, teaming two strangers to answer trivia questions. Leno’s many honors include Emmy Awards, the Mark Twain Prize, a Patriot Award from the Congressional Medal of Honor Society, and a star on Hollywood’s Walk of Fame.

Trombone Shorty, born Troy Andrews in New Orleans, led his own brass band at age 6. He has toured and recorded with such stars as Lenny Kravitz, Jeff Beck, the Red Hot Chili Peppers, Pharrell, and Bruno Mars. A natural-born showman, he commands audiences with effortless charisma. He has performed at major music festivals, the Grammy Awards ceremony, and the White House, and on dozens of TV shows. His latest album, Lifted, features the blistering “I’m Standing Here.” “If I was a wrestler, ‘I’m Standing Here’ would be the song they played when I came into the ring,” Shorty said. “It’s all about standing tall no matter what life throws at you.”

Eloquently straightforward songwriting and incomparably expressive singing over a 40-year career have made Emmylou Harris one of the most admired and influential women in music. The 13-time Grammy Award winner and Billboard Century Award recipient has recorded more than 25 albums. She has received three Country Music Association Awards and four Americana Music Association awards. She has been inducted into the Country Music Hall of Fame and earned a Grammy Lifetime Achievement Award. Few artists have achieved such honesty or revealed such maturity in their writing. Harris continues to share the hard-earned wisdom that comes with getting older. And, as always, she continues to resolutely look ahead.

The Temptations and The Four Tops Saturday, January 21, 2023

Soul music royalty will grace the stage when The Temptations and The Four Tops showcase their staggering treasuries of classic American songs. Billboard magazine named The Temptations the top R&B/hip-hop artists of all time. The late David Ruffin of nearby Whynot, Mississippi, sang lead on some of their greatest hits, including “My Girl,” “Ain’t Too Proud to Beg,” and “I Wish It Would Rain.” The Four Tops had a similarly long string of iconic singles, including the achingly romantic “Reach Out I’ll Be There,” “Standing in the Shadows of Love,” and “Bernadette.” For those who experienced the heyday of Motown Records, and those who wish they had, this concert is a must.