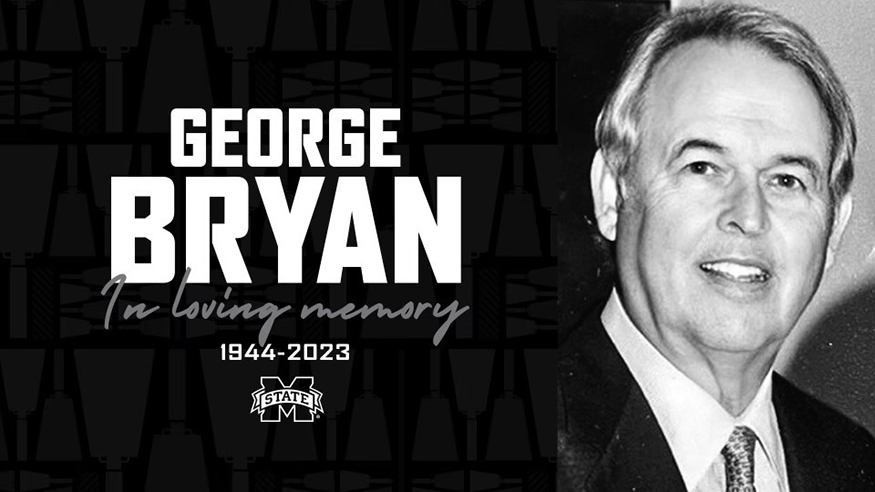 George Wilkerson Bryan, Sr. was born in West Point, Mississippi in 1944. He was the son of John H. Bryan and Catherine Wilkerson Bryan, the youngest of four siblings. George was a devoted husband and father and a member of the First  Presbyterian Church in West Point, Miss. Throughout his life, he devoted his energy and passions toward his family, his friends, his businesses, and golf. He had a deep and positive impact on the people in his life.

“It is difficult to overstate the impact of the loyalty and generosity of George Bryan and his family to Mississippi State University,” said MSU President Mark E. Keenum. “George was a force of nature in business and in sports, but it was his rare vision and perspective that is most remarkable. He could see what could be and what should be and then set about making it happen. George and Marcia left an indelible imprint on MSU. On a very personal level, I will miss George’s wise counsel and guidance in ongoing efforts to advance our beloved university. Rhonda joins me in mourning his passing and praying for his family.”

Bryan supported multiple athletic and academic causes at his alma mater over the course of his life, but the university building that bears his family name is perhaps their best-known contribution. The Bryan Athletic Administration Building is a crown jewel of MSU's athletic expansion projects of the 1990s. A $5 million facility that opened its doors in January 1995, the facility was made possible largely due to the generosity of the Bryan family. The Bryan Building houses MSU’s athletic administration offices as well as MSU’s athletic ticket office, the Bulldog Club, media relations, business and student services offices.

A 1968 business administration graduate of Mississippi State University, Bryan was a member of Sigma Chi Fraternity. Years later, he was awarded the fraternity’s highest alumni honor when he was named a “Significant Sig.” Prior to entering college, Bryan began his business career in 1964 at Bryan Foods, his family’s West Point-based meat products manufacturing company. He was a graduate of West Point High School.

In addition to serving as Sara Lee Corp’s SVP until 2000, Bryan served as chief executive officer of Sara Lee Foods and chairman and director of the American Meat Institute before retiring in 2000.

A tireless champion of business, civic and charitable endeavors, Bryan also served as general campaign chairman for the United Way of the Mid-South, a 30-year director and member of the Audit, Trust, and Compensation committees of Regions Bank, and past president of the Chickasaw Council Boy Scouts of America. He was named an “Outstanding Mississippian” in 1979 by then-Gov. Cliff Finch and was inducted into the West Point Hall of Fame in 1992 and West Point “Citizen of the Year” in 2000.  Most recently, George is scheduled to be inducted into the Mississippi Golf Association Hall of Fame in Jackson, Miss. on January 21, 2023.

MSU Interim Athletics Director Bracky Brett said: “We are incredibly saddened to learn of the passing of George W. Bryan. George was a longtime friend, devoted supporter and proud contributor to MSU, who made a lasting impact on the growth of our university, athletics program and entire community. He will be missed deeply, but his memory and legacy will never be forgotten. For generations, the Bryan family has helped take MSU to new heights. They are in our thoughts and prayers, and our deepest condolences go out to them.”

The Liberty Bowl awarded Bryan the “Spirit of 1776” Award in 2013. The Mississippi Sports Hall of Fame honored him with the “Rube” Award (named for sportscaster Michael Rubenstein) in 2015 and the Mississippi Golf Association presented him the Distinguished Service Award in 2015.

Former MSU Athletics Director Larry Templeton, who worked closely with Bryan during the prime of his illustrious career, said: “George Bryan cast a long and important shadow over business and sports across this state and nation. His commitment to transforming MSU’s athletic and academic fortunes was second to none. He was my friend, my valued sounding board, and someone I genuinely enjoyed spending time and fellowship with.”

In 1988, George and wife Marcia were co-founders and owners of his hometown’s Old Waverly Golf Club, one of the South’s premier golf destinations and home to Mississippi State men’s and women’s golf programs. He led in bringing the U.S. Women’s Open to Old Waverly in 1999 — the most prestigious event in women’s professional golf — an achievement that earned him the Jackson Clarion-Ledger’s 1999 “Sports Person of the Year” Award. Bryan also was co-founder of Mossy Oak Golf Club, also home to MSU’s golf programs. Brought to life by Gil Hanse, Mossy Oak Golf Club, which opened in 2016, quickly became one of the most revered golf courses in all of the U.S. and was recognized in 2018 as one of Golfweek’s Top 100 Modern Golf Courses.

VJ Trolio, golf teaching professional, at Old Waverly Golf Club, shares the following message: “The idea of wealth or accomplishment leaves out the idea of greatness. Greatness is something more. Greatness is aspiration and victory but it is also INSPIRING others. God tells us he judges the heart of men which obviously means God expects us to use our gifts for the Glory of God. Simply, he wants us to inspire others. George Bryan did that. George Bryan not only led a life of vision, he allowed so many to lead their own life of vision. He led a life of greatness and we, as coaches, teachers, and players of the game he loved, thank him for inspiring us.”

In lieu of flowers, the family asks that you support Old Waverly Junior Golf Foundation, The First Presbyterian Church of West Point, MS, The Mississippi State University Bulldog Club or charity of your choice.