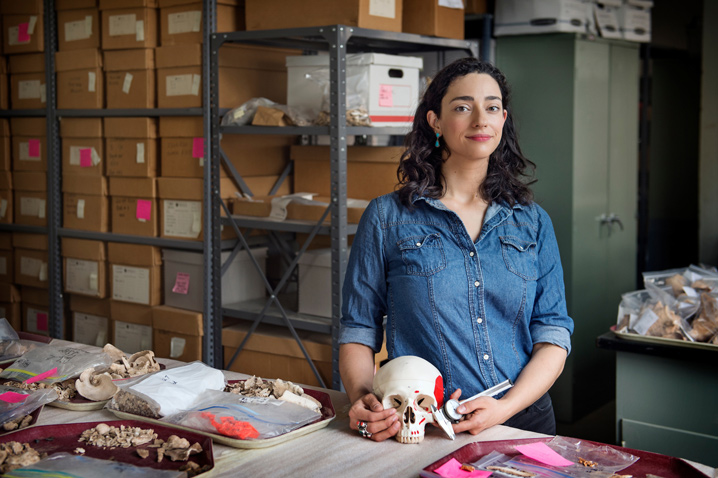 STARKVILLE, Miss.—A fascination with skeletons and the clues they provide about those who lived in the past led Molly Zuckerman to pursue a career in anthropology.

Now an associate professor in Mississippi State University’s Department of Anthropology and Middle Eastern Cultures, Zuckerman is using lessons from ancient skeletal remains to guide insight into the spread of diseases today.

“I’m really interested in how diseases change over time,” Zuckerman said. “I want to know how the diseases that impact entire human populations shift over time and how that can cause a shift in rates of death and sickness. I view skeletons as little petri dishes. They can generate lasting lessons about wealth, social inequality, poverty and stigma and how these can shape health. These lessons are directly applicable to future populations and present populations.”

Zuckerman and two colleagues from the University of Oklahoma, Courtney Hofman and Christina Warinner, recently received a $64,467 National Science Foundation grant to study the use of human dental calculus, a form of hardened dental plaque, as a tool for identifying and diagnosing infectious diseases in past populations that are not otherwise identifiable with a high certainty in human skeletal material. These diseases include syphilis, tuberculosis and pneumonia.

When the methods developed with this research are applied to human skeletons from archaeological sites, researchers may be better able to understand when certain diseases appeared, how they affected different populations, and subsequently spread.

“These kinds of data have obvious real-world implications. One need only look at the spread of Zika, for example,” said Rick Travis, dean of MSU’s College of Arts and Sciences. “Dr. Zuckerman puts MSU and AMEC at the front lines of anthropological efforts to address ongoing human health crises.”

As a result of this research, public brochures and a permanent hands-on educational exhibit will be created for MSU’s Cobb Institute of Archaeology. Additionally, the results from this study will be disseminated in peer-reviewed scholarly publications, as well as highlighted in science education programming for broad and diverse audiences. Zuckerman, along with the other recipients, also will give multiple public and K-12 lectures in collaboration with local and national educational organizations.

Zuckerman’s interest in infectious diseases primarily started when she was at Emory University and wrote her dissertation on syphilis. She continues to research the disease, which in part led her to the NSF grant on infectious disease transmission.

“The nice thing is that rather than that being an esoteric research question, it’s directly relevant to public health,” Zuckerman said. “Syphilis is one of the diseases returning with great force and intensity. It’s increasing in incidence throughout both developed and developing nations. You can’t culture syphilis, so it’s almost impossible to work on it in a lab setting. Studying people who lived in the past is one of the only ways to understand more about the disease.”

Zuckerman said she enjoys discussing her research with students in class, and helps facilitate research opportunities for interested students. She teaches a class called plagues and peoples that examines the relationships between infectious diseases and society. She also teaches a class on biology and culture, which studies how biology and social conditions combine to produce biology and health.

“With plagues and peoples, we start before humans even evolved,” Zuckerman said. “We work with pre-humans and trace human populations through time. What emerges as we go through the class is the same theme I find interesting in research, which is how social inequality and poverty shape different health conditions.”

One of Zuckerman’s recent projects has received statewide, national and international news coverage. Zuckerman is part of the University of Mississippi Medical Center-based Asylum Hill Research Consortium, which is studying ways to research and memorialize the remains of up to 7,000 patients of the state’s first mental institution who were buried on the campus from the mid-1800s to the early 1900s. Zuckerman assisted with the excavation of many skeletons at the site in 2012 and has since been involved with documentary records and work on the skeletons. She has presented conference papers on her findings and expects to continue working on the project for another 5-10 years as it moves forward.

MSU’s College of Arts and Sciences includes more than 5,000 students, 300 full-time faculty members, nine doctoral programs and 24 academic majors offered in 14 departments. It also is home to the most diverse units for research and scholarly activities, including natural and physical sciences, social and behavioral sciences, and the humanities. For more information on MSU’s College of Arts and Sciences, visit www.cas.msstate.edu.

More information on the Department of Anthropology and Middle Eastern Cultures can be found at www.amec.msstate.edu.

Image Alternative Text: A Bully statue is pictured as snow falls around it