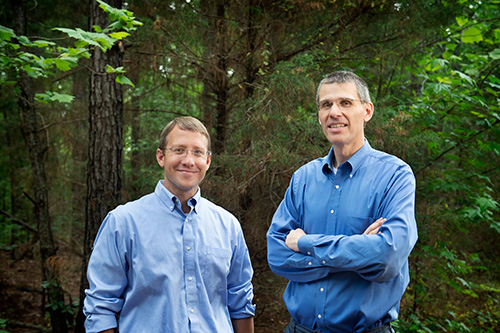 Stephen Brain and Mark D. Hersey, associate professors in the university’s Department of History, are excited to share insight and expertise through their new roles with Environmental History. They will begin work on July 1 and assume full charge of the journal on Jan. 1, 2019, with Hersey serving as editor and Brain as co-editor. Their appointments represent the culmination of a rigorous search process of a committee constituted by mutual agreement between the American Society for Environmental History and the Forest History Society.

Published four times a year by Oxford University Press on behalf of the American Society for Environmental History and the Forest History Society, the journal brings together scholars and practitioners from the humanities, sciences and social sciences to explore the changing relationships between humans and the environment over time.

An MSU faculty member since 2007, Brain also serves as the history department’s graduate program coordinator. He has taught a variety of undergraduate and graduate courses over the years, including classes on Russian, Soviet Union and European history. As a 2013-14 recipient of the prestigious Fulbright Fellowship, Brain traveled to Rostov-on-Don, Russia, where he taught World Environmental History and Western Historiography courses. He also conducted research on Russian agriculture and its relationship to Russian history, with a focus on the environmental influence of collectivism.

In 2005-06, Brain was awarded a Fulbright Fellowship to Moscow, Russia, where he worked in the State Archive of the Russian Federation, Russian State Economic Archive, Moscow Oblast Regional Archives, and the Archive of the Communist Party.

Hersey’s principal research interests lie in the field of environmental, rural and agricultural history with emphasis on the American South, in particular Alabama and Mississippi. Along with a bachelor’s in history from the University of Alabama, he received his U.S. environmental history doctorate with honors from the University of Kansas, where he served as an editor and interim director for two public history projects. He is the author of “My Work Is That of Conservation: An Environmental Biography of George Washington Carver” (Athens: University of Georgia Press, 2011), which was named one of Booklist’s Top Ten Books on the Environment in 2012.

Like Brain, Hersey has been involved with the American Society of Environmental History, including service on the organization’s digital communications committee. He has edited special issues on environmental history for two journals and currently is an editor for the University of Alabama Press’s NEXUS book series. At MSU, he directs the Center for the History of Agriculture, Science and the Environment of the South, of which Brain is a core faculty member. With Ted Steinberg, Hersey co-edited a collection of essays titled “A Field on Fire: The Future of Environmental History” that will be released later this year. He is working on a study of the physiographic Black Belt of Alabama and Mississippi, exploring the intersections of land use, race and identity since the late 18th century.

Part of MSU’s College of Arts and Sciences, the Department of History can be found online at www.history.msstate.edu.

Image Alternative Text: A student in military fatigues work on his laptop in front of a window on campus.