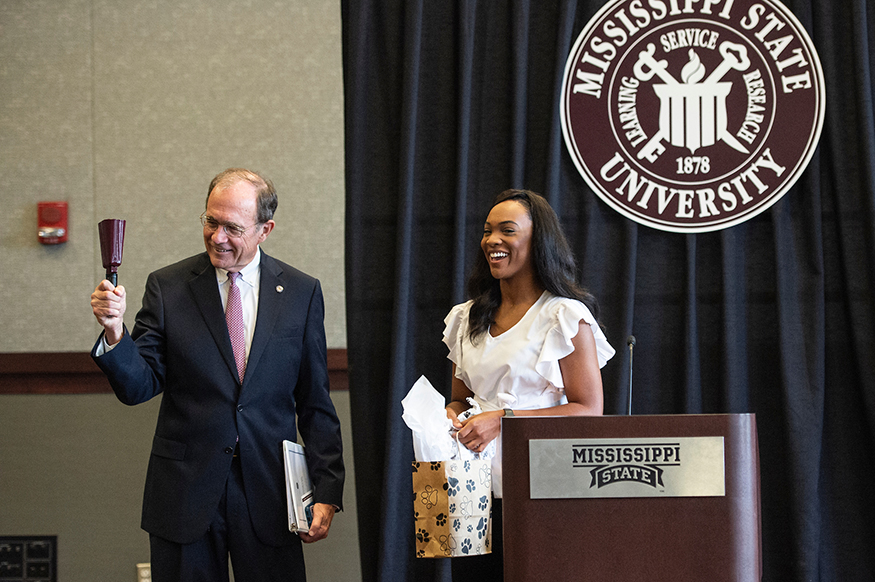 Hosemann spoke to students in advance of a two-day voter registration drive being held on the MSU campus this week. Student leaders organized the drive to coincide with National Voter Registration Day, held annually on the fourth Tuesday in September.

During his speech in Colvard Student Union, Hosemann reminded students there are currently over 3,000 Mississippians deployed in the Middle East with the Mississippi Army National Guard’s 155th Armored Brigade Combat Team, who, along with their families back home, are making significant sacrifices to protect core values such as the right to vote.

“You have a right to cast a ballot, and that right has been defended by countless Americans overseas,” Hosemann said. “You have the right, and an obligation. You have an obligation to go vote for those 3,000 Mississippians.”

“We’re excited about getting students registered to vote and getting them engaged in government in Mississippi,” Emerson said. “This started with the Student Body Presidents’ Council, and we decided that we really wanted to get students involved and encourage them to get engaged in their community.”

“Your vote does matter, and I hope you all understand that and respect that right,” Keenum said. “It’s one of the most important rights you have as a citizen of this great country and that is to express your voice, your opinion, and to make decisions on the leadership of our state and our nation. There’s nothing more important you can do as a citizen than to go vote.”

The Secretary of State’s office is responsible for overseeing elections in Mississippi. For information on elections and voter registration in the Magnolia State, visit www.sos.ms.gov/vote.

Locally, voter information can be found at the Oktibbeha County Circuit Clerk’s Office, located at 108 W. Main Street in Starkville and available via telephone at 662-323-1356.