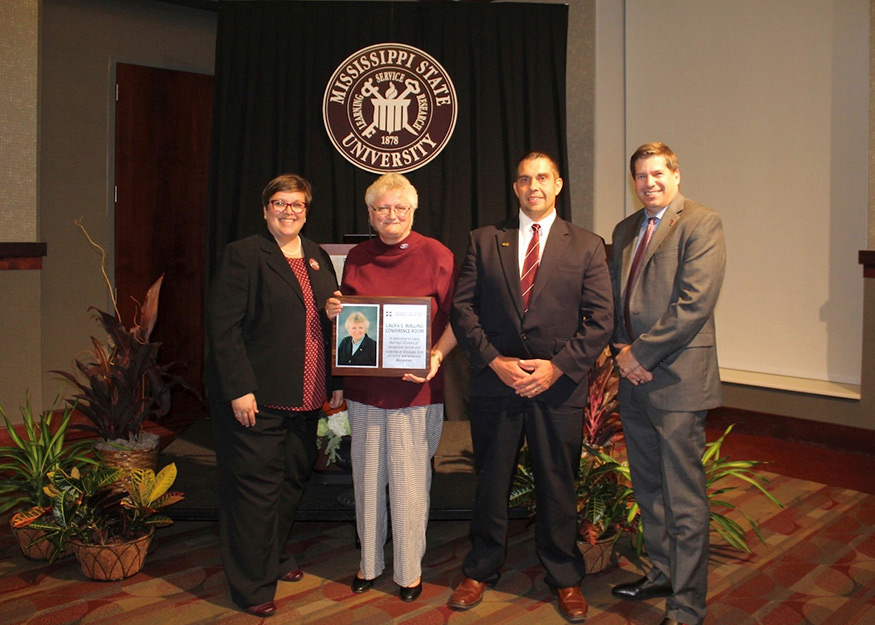 STARKVILLE, Miss.—Mississippi State’s Division of Student Affairs celebrated the 20th anniversary this week of what has become a campus epicenter of student recreation.

The Joe Frank Sanderson Center opened its doors in the summer of 1998, and the $19.1 million indoor recreation and fitness facility was dedicated during Homecoming festivities that year. The 150,000 square-foot building has since offered swimming, strength and aerobic conditioning, basketball, volleyball, racquetball, badminton, rock climbing and jogging, among other activities.

Sanderson was a 1947 MSU graduate who went on to success with his family business, Laurel-based Sanderson Farms, and whose major contribution made the university center possible.

A banquet celebrating the milestone anniversary also honored a retired MSU staff member whose longtime service was an integral part of the Sanderson Center’s successful launch and operation through nearly two decades.

The Sanderson Center’s conference room was dedicated to Laura E. Walling, who retired in 2016 after 26 years as director of University Recreation, formerly known as Recreational Sports. Walling served the university for a total of 32 years.

“Laura was a mentor and a role model for countless professionals and student employees throughout her years in University Recreation,” said Patrik Nordin, who succeeded Walling as director. He added that her leadership was important during the design and construction of the Sanderson Center.

Nordin said the facility is a large employer of student workers and serves as an outreach point for the community.

“This facility has had a huge impact on campus and student life. There are so many fitness opportunities available, and many student organizations use the Sanderson Center on a weekly basis – everything from martial arts to ballroom dancing clubs,” Nordin said. “Thousands of children from our local community have learned how to swim here, and there are many activities offered that were not available prior to the Sanderson Center opening.”

More than 3,800 MSU graduates prepared to ‘do great things’ as Bulldog alumni