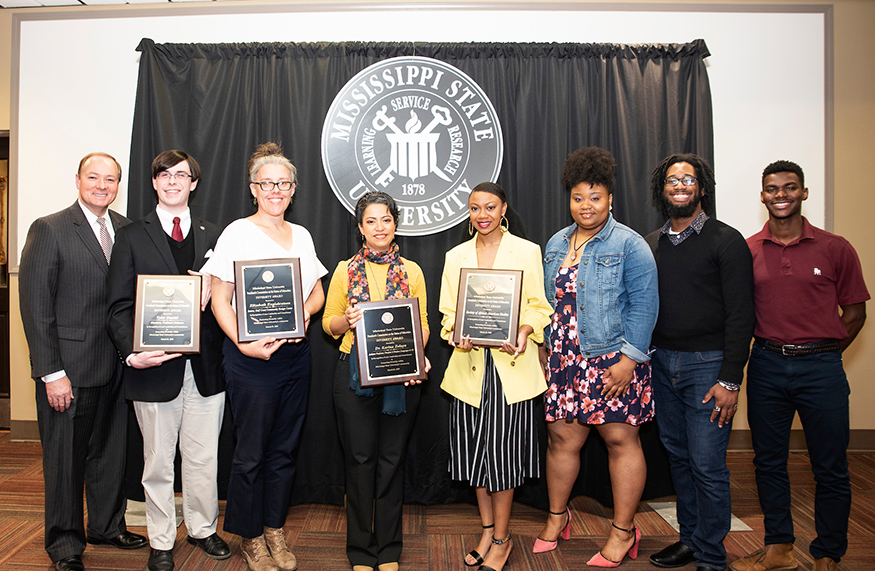 Honorees received their respective 2019 Diversity Awards during a March ceremony hosted by the MSU President’s Commission on the Status of Minorities. The commission is led by committee chair Tracey Baham, associate director of MSU’s Office of Institutional Research and Effectiveness.

The 2019 Diversity Award honorees are:

—Elizabeth Englebreston, staff recipient, is a public interest landscape designer with the MSU Gulf Coast Community Design Studio. After working for many years in a variety of jobs combining science, art and community engagement, Englebreston pursued landscape architecture as a career. Since joining the Gulf Coast Community Design Studio in Biloxi in 2014, Englebreston has worked on a variety of large- and small-scale projects that focus on strengthening, supporting and reinforcing a sense of place and placekeeping, and giving the community greater connection and agency over its landscape.

—Tyler Daniel, student recipient, is a senior political science major from Clinton. As the president of Hillel, MSU’s Jewish student association, Daniel has worked to further relations between Mississippi State’s minority religious student organizations. In the wake of the Pittsburgh synagogue shooting last October, Daniel worked with area religious leaders and university administrators to organize a vigil as a way for the MSU community to show solidarity with its Jewish students. Daniel also works to promote international diversity on campus and serves in leadership positions in several organizations. He plans to continue his studies next fall as a master’s student in the Department of Political Science and Public Administration.

—Karina Zelaya, faculty recipient, is an assistant professor in the Department of Classical and Modern Languages and Literatures, where she teaches Spanish. She is an advocate for traditionally underrepresented groups. Beyond her responsibilities in the classroom, Zelaya has organized and led numerous study abroad programs to Latin America and is a strong supporter of the Latino Student Association. Zelaya has a record of bringing globally recognized scholars and artists to MSU who share fresh perspectives, new insight, and new ways of thinking.

—The Society for African American Studies, team recipient, is a student organization working to raise students’ awareness and address the concerns of diversity issues, particularly through African American perspectives. The organization seeks to create an environment conducive to learning and provides students with opportunities to serve the community under unique and challenging circumstances. Led by President Morgan Alexander of Jackson, the organization’s calendar is populated with events such as panel discussions and chat sessions on topics including colorism, black health matters, athletics and activism, racial etiquette, cultural appropriation, the state of the black community, and safe spaces.

For more on the MSU President’s Commission on the Status of Minorities, visit www.committees.msstate.edu/pcsm.