STARKVILLE, Miss.—A Mississippi State University Civil War expert and associate professor of history received a starred review in Library Journal for his newest publication, described by the periodical as a “brilliant book” that depicts how “the Civil War-era generation struggled to give form and force” to American ideas of liberty. 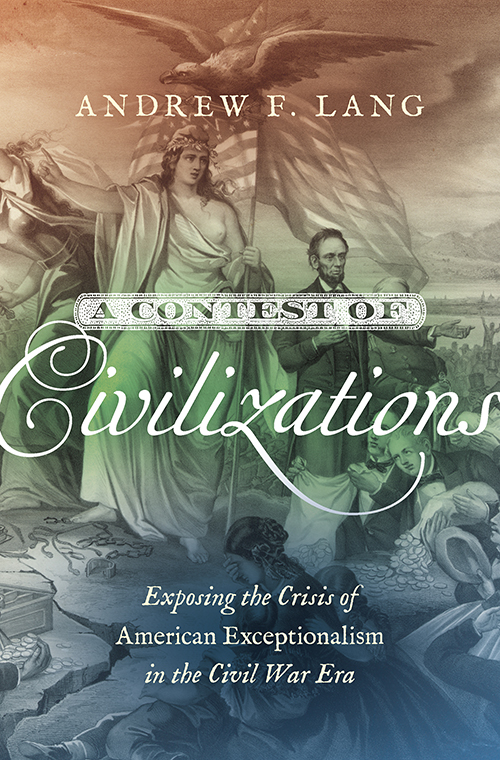 Andrew F. Lang’s book, “A Contest of Civilizations: Exposing the Crisis of American Exceptionalism in the Civil War Era” (2021), is the final installment of UNC Press’s landmark series, the “Littlefield History of the Civil War Era.”

“The book explores a controversial yet long-standing dogma of national identity—American exceptionalism—which holds that the U.S. was founded as the exception to monarchical tyranny and aristocratic privilege,” Lang said.

The book explains how 19th-century Americans “questioned whether the Union could chart a distinct course in human affairs when slaveholders, abolitionists, free people of color and enslaved African Americans” had differing definitions of nationhood.

“The powerful institution of slavery severed the way 19th-century Americans understood the U.S. as the world’s ‘last, best hope’ of political liberty and economic mobility,” Lang said. “This book is relevant to 2021 because it is not merely about American history. Generations of Americans have imagined the U.S. as a unique nation in the world, a republic whose origins rest on individual liberty. But as the book demonstrates, the American experience is not so clear cut, often riddled with paradox, contradictions, triumphs and shortcomings.”

Library Journal, a publication founded in 1876 to review library-related materials, said in its starred review of the book, “Lang’s tour de force is a compelling and essential read. He shows how Americans’ self-anointed claim of exceptionalism was, and is, premised on a supposed consensus on liberty’s meaning that never was and perhaps will never be. Vital reading for all.”

Lang said the book serves as a reminder that “the enduring ideals of equality and liberty establish standards for all generations to strive for a more perfect Union.”

“The nation’s fate depends on an energetic, committed citizenry to uphold and preserve the enduring ethics of American life, lest those principles wither from our own neglect,” Lang said.

Lang is the recipient of the 2020 Beverly B. and Gordon W. Gulmon Deans Eminent Scholar in the Humanities honor and the 2018 William E. Parrish Faculty Teaching Award at MSU.

Lang also is a 2018 recipient of the Tom Watson Brown Book Award, presented annually by the Society of Civil War Historians to an author whose work provides original contributions to the understanding of the Civil War time period, for his 2017 LSU Press publication, “In the Wake of War: Military Occupation, Emancipation, and Civil War America.”

Lang’s research at MSU focuses on how 19th-century Americans understood and created warfare, particularly during the Civil War Era.

MSU’s College of Arts and Sciences includes more than 5,200 students, 323 full-time faculty members, nine doctoral programs, 15 master’s programs and 27 undergraduate academic majors offered in 14 departments. It also is home to the most diverse units for research and scholarly activities, including natural and physical sciences, social and behavioral sciences, and the humanities. For more details about the College of Arts and Sciences or the history department, visit www.cas.msstate.edu or www.history.msstate.edu.

Image Alternative Text: A group of students wearing masks stand on the steps of Lee Hall.

Image Alternative Text: A group of more than 30 people gather around a newly planted tree on MSU's Drill Field.