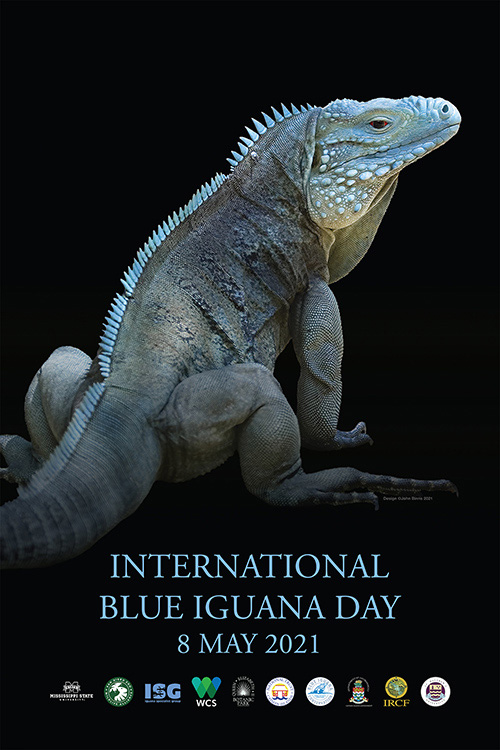 STARKVILLE, Miss.—A Mississippi State University biological sciences faculty member is using Blue Iguana Day on May 8 to bring awareness to the endangered species and highlight the university’s role in an international collaboration to protect the reptile.

Professor Mark E. Welch in MSU’s Department of Biological Sciences works in partnership with the Cayman Department of the Environment and the Cayman National Trust, an organization seeking to preserve the history and biodiversity of the Cayman Islands.

Welch and his students conduct genetic research on iguana species present in the Cayman Islands, including the blue iguana (Cyclura lewisi), and have studied 10 of the 12 known living iguana species in the Caribbean. Cyclura is widely considered by scientists to be the most endangered genus of reptiles in the world.

“Blue iguanas are an incredibly charismatic flagship species for the conservation of species in the Caribbean,” said the iguana conservation genetics expert. “This is a broader initiative. By protecting them and their natural habitat, we also are bringing awareness to—and contributing to—the conservation of other native species, such as birds and plants.”

The blue iguana once numbered in the tens of thousands in the Caribbean, but by 2001, because of habitat loss and introduced species, fewer than 30 were estimated to remain in the wild. The species was listed as critically endangered by the International Union for the Conservation of Nature in the early 2000s. By 2018, because of conservation efforts, more than 1,000 blue iguanas were restored to the wild population.

“Blue Iguana Day is an opportunity to engage the public—especially in the Caymans, their natural habitat—to help the species survive,” Welch said. “Understanding what makes populations thrive and allowing them to adapt to changing climates or go extinct is fundamental to population biology.”

Welch earned his bachelor’s in biological sciences and master’s in ecology from the University of Tennessee and he holds a Ph.D. in biology from Indiana University. Before joining MSU’s faculty in 2007, he completed postdoctoral work at Vanderbilt University.

Part of MSU’s College of Arts and Sciences, the Department of Biological Sciences may be found at www.biology.msstate.edu. MSU is Mississippi’s leading university, available online at www.msstate.edu.