STARKVILLE, Miss.—A fourth book in the Mississippi “Hidden History” series has been published by a Mississippi State faculty member and journalism advisor.

The History Press book series penned by the two authors details the mysteries and hidden aspects of the Deep South and explores stories of early Mississippians about whom little has previously been known.

“Natchez’s history is so unique that it begs to be written about,” Foreman said. “Natchez was the grand village of the Natchez Indians, a fortress for the French, a trading hub for the British, a target of American pirates, and a prize of the Spanish, all before it became part of Mississippi. So many different kinds of people have lived in Natchez that the layers of culture and history there are as thick as its silt loam soil. 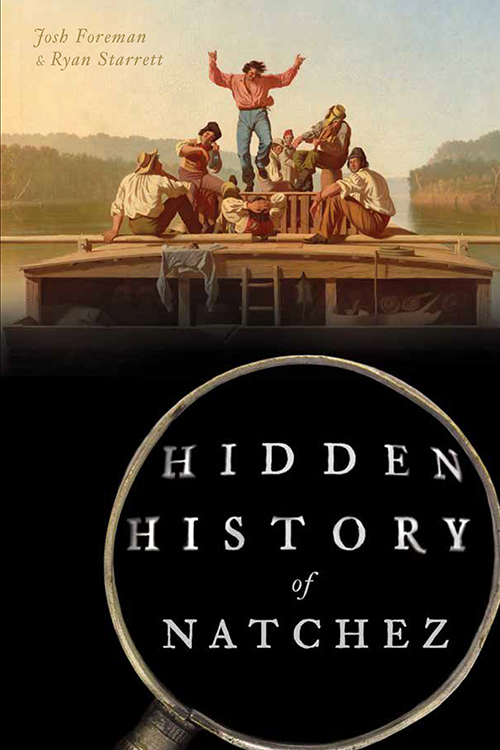 “Mississippi’s history is so present that it can be overwhelming. That is a blessing and a curse for us Mississippians. But if we tell true stories about the Mississippians who came before us, we honor them and reveal a part of the path forward,” Foreman said.

“A good example is John Blommart, who is virtually unknown to Mississippians today, but he was a sea captain who traveled the world, a Swiss mercenary and British war hero, and the richest man in Natchez at one time,” Foreman said.

“Another good example is William Johnson, a free Black citizen of Natchez who became wealthy running a barber shop. Johnson kept one of the most detailed and thorough journals of any Natchez citizen from that era and, in so doing, gifted the city with a colorful account of life in the city in the 1830s and ’40s.”

Foreman and Starrett are planning future books about the larger Natchez Trace area, the Mississippi Delta and North Mississippi regions. More information about the authors is available at www.foremanstarrett.com.

“Josh is a storyteller at heart,” said Terry Likes, professor and head of MSU’s communication department. “Like most journalists, he strives to find unique stories about American life.

“Josh wears many hats from teaching photography and journalism, overseeing the Bulldog online newsroom—a new capstone course in the Print and Digital Journalism concentration—to advising The Reflector and chairing the Story State conference held at MSU. All of these components involve telling engaging stories like Josh is doing with his Hidden History series which, in this case, details colorful and tragic stories in the Magnolia state.”

Part of the College of Arts and Sciences, more information about the Department of Communication is available at www.comm.msstate.edu.